We spent all day yesterday completing the task of winterizing Onapua. As well as replacing the water with antifreeze in the engine, head and water tanks, I had to disconnect the batteries, drain the engine water pump so that the impeller wasn't sitting in antifreeze all winter. I loosened up the engine belt and swapped it end to end. The worst thing I discovered was when I came around to adding distilled water to the batteries. Each of my 4 batteries needed about 16 ounces to bring the levels up to cover the plates. Terrible! Thinking about it afterwards, it is probably due to the fact that I have been Motoring through all the locks on the Erie Canal and the Trent Severn Waterway and have been overcharging the batteries.

I met Dan and Francine when I was in the Caribbean doing the Cuba Salty Dawg Rally and they were the ones who suggested that I check out the North Channel. Dan has been helping me and I must say that I had no idea how much effort winterizing a boat takes. 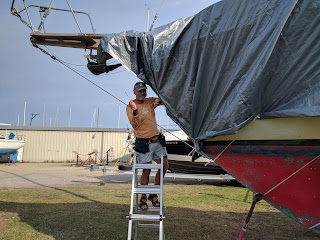 I bought a huge tarp from harbor freight and we had to cut it down to fit. 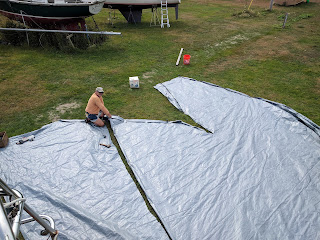 Then we had to turn the edges to make a hem and install grommets. The idea is to stop the tarp flapping in the wind by pulling it tight around the boat. In the end it looked very good and I am confident that very little snow will get inside the boat. 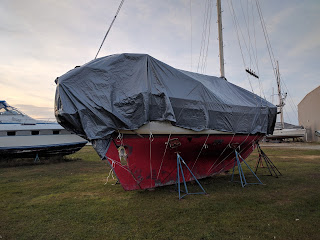 It was a very sad day leaving her and knowing that I will not be back until May of next year. So check back to this blog again in 6 months, when I will resume my cruising this time hopefully in Lake Superior. In the meantime I will be going down under to NZ to enjoy another summer.
Posted by Onapua at 8:32 AM