Forecast was really bad for tonight so I stopped in at Ocean City on the New Jersey shore just south of Atlantic city. 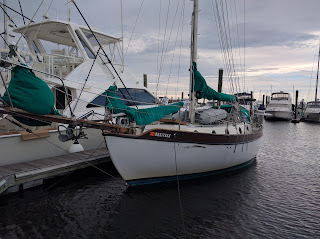 It feels strange to be in a marina again with all the comforts of home. After 5 days at sea, my shower tonight felt so nice. And I will get to watch the closing ceremony for the Olympics at the bar here. Ocean city is such a built up place with Atlantic city just to the right in the photo.

I did have a customary escort of dolphins into the harbor. 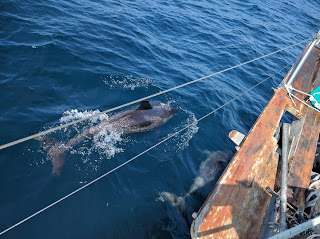 It's not a very good photo and yet there were at least 20 of them playing off the bow for a good 10 minutes. I did try my hand at fishing Friday at dusk which is a very rare thing for me. 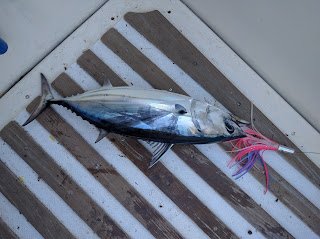 There were at least a dozen fishing boats off Hudson Canyon 130 miles off shore when I went by there so I figured there had to be something around. I can't see forking out $1,000 for the fuel it must take them to get there. I used 20 gallons to cover 360 miles but most of that was sailing.
Tomorrow I head out once more to catch this northerly wind and hopefully i will make it to the mouth of the Chesapeake bay Tuesday.
Posted by Onapua at 7:19 PM