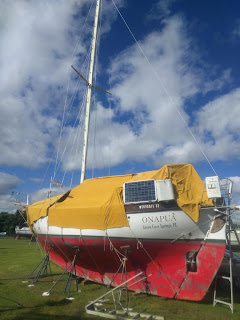 I used antifreeze in my holding tank from my head and I used it in the bilge. I ran the engine and used the antifreeze in the raw water intake to suck the antifreeze throughout the engine. After that I undid the nuts on the water pump cover to drain the antifreeze out from around the impeller. One gallon went in my rear water tank and one in my front water tank. Altogether I used 8 gallons of antifreeze which cost $2.48 per gallon at Menards, a big hardware store up here in Wisconsin. Finally I disconnected the wires on the batteries and topped them up with distilled water.

All set for another winter.

I'll be going down under again for the winter like I did last year but first there are some grandchildren to catch up with again and also the boat show in Annapolis along with a talk by Jerome Rand who just completed a circumnavigation in a Westsail 32 just like mine. You can find out more at 5thcape.com on the internet.