New Caprail and a drop down propane test

Today I focused on installing a 12 foot section of caprail that was broken in tropical storm Beryl. It has taken me ages to do this project because I was not sure whether I wanted to replace all of the caprail or just the  parts that needed  it. The old caprail was mahogany so I bought some from Woodcraft and in the end it was not that big of a deal. 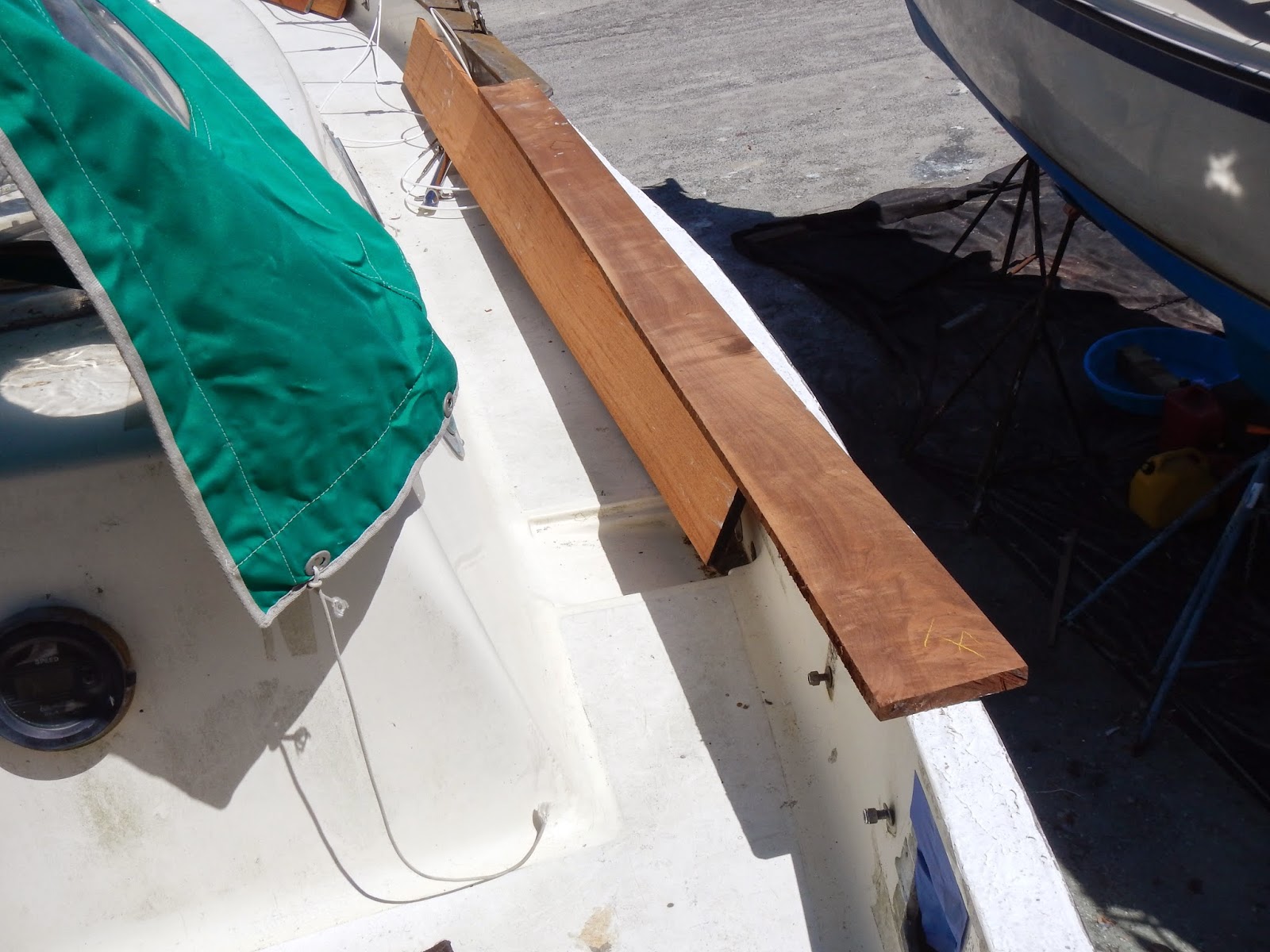 I did the missing section in 2 parts to allow for expansion and laid the boards out and used a pencil to outline the bulwark pattern on the underside of each board. Measure 7 times, cut once! 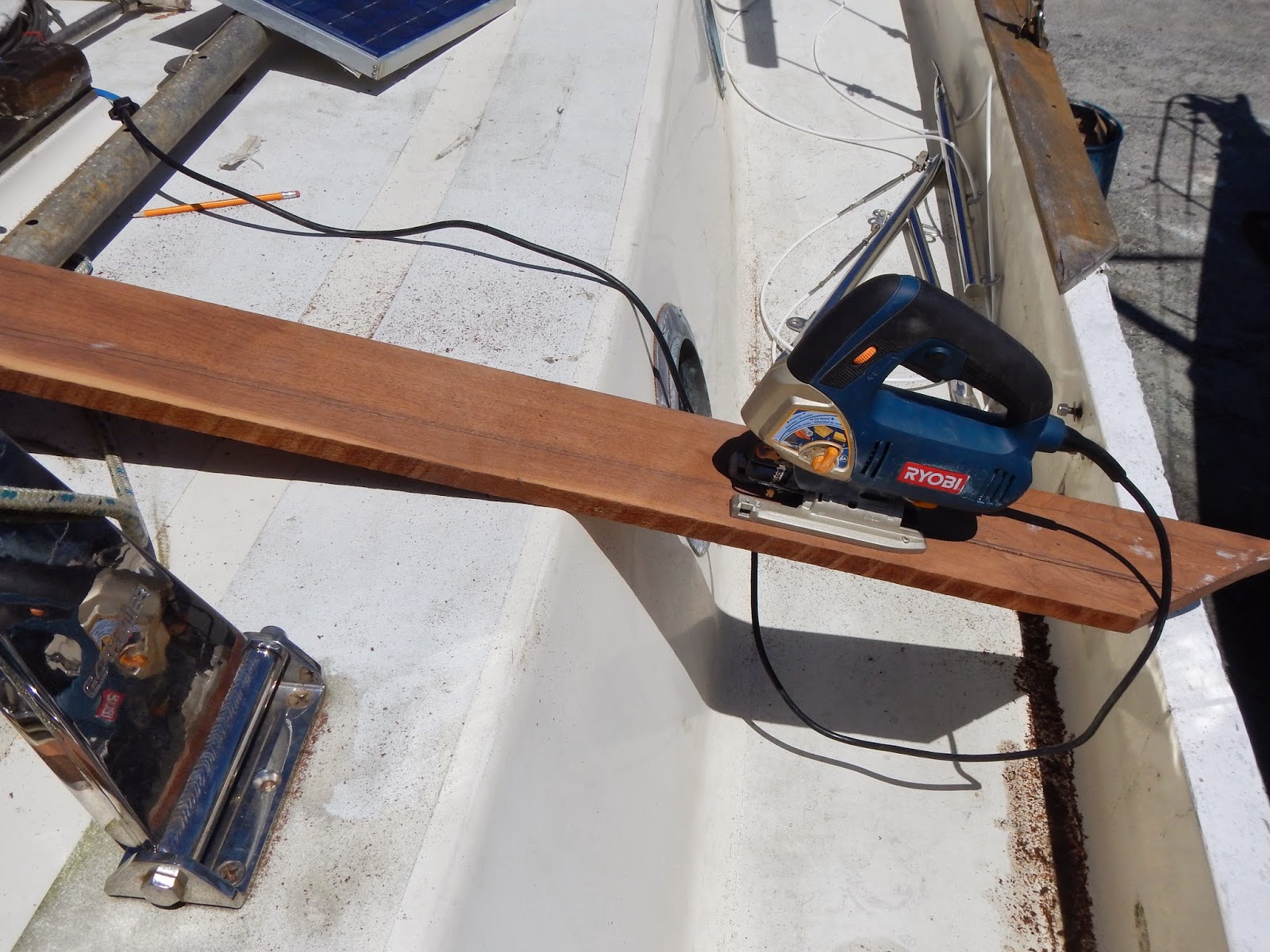 Cutting out the pattern with a jigsaw was a cinch. 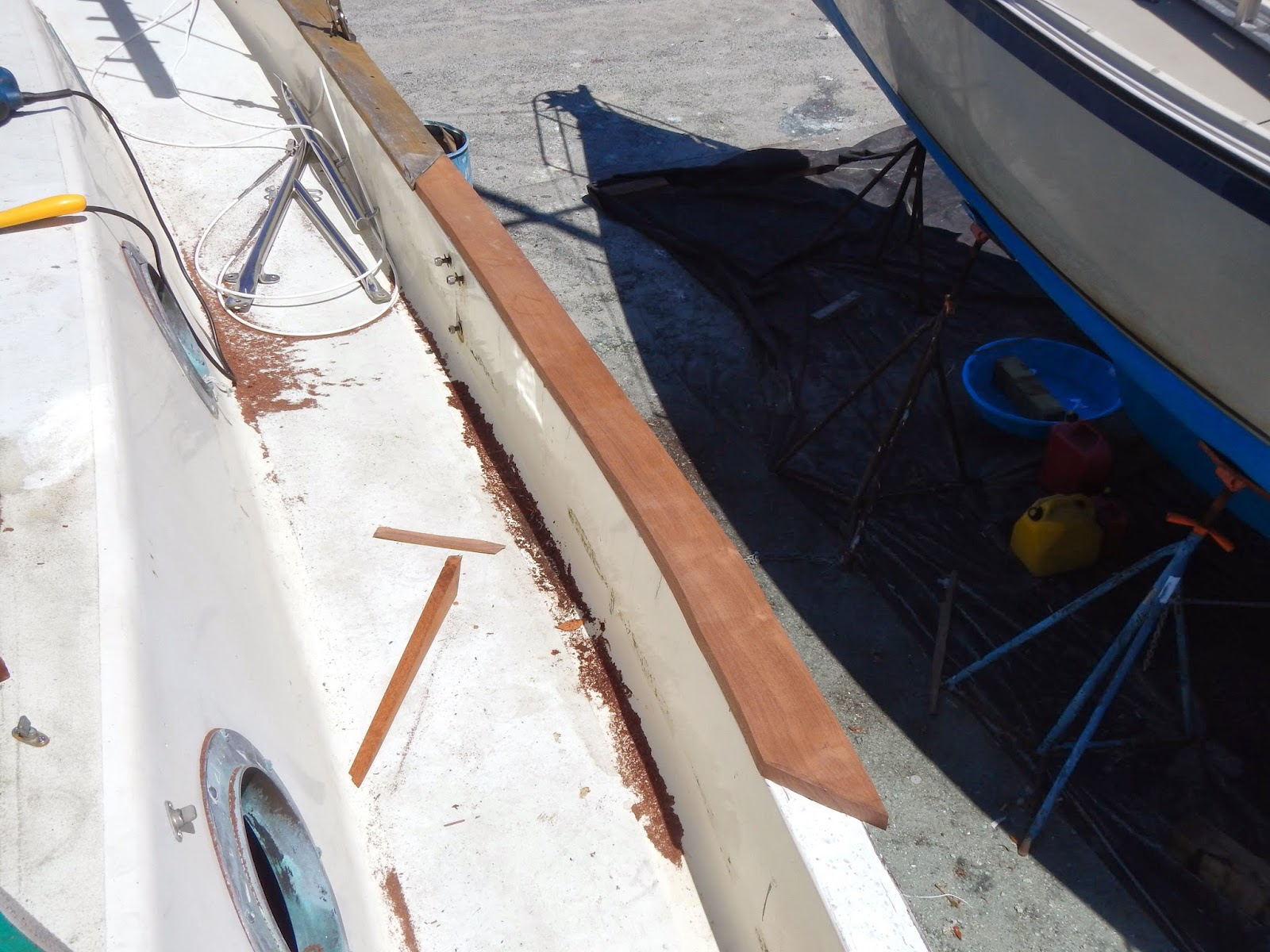 So the first one went in smoothly. 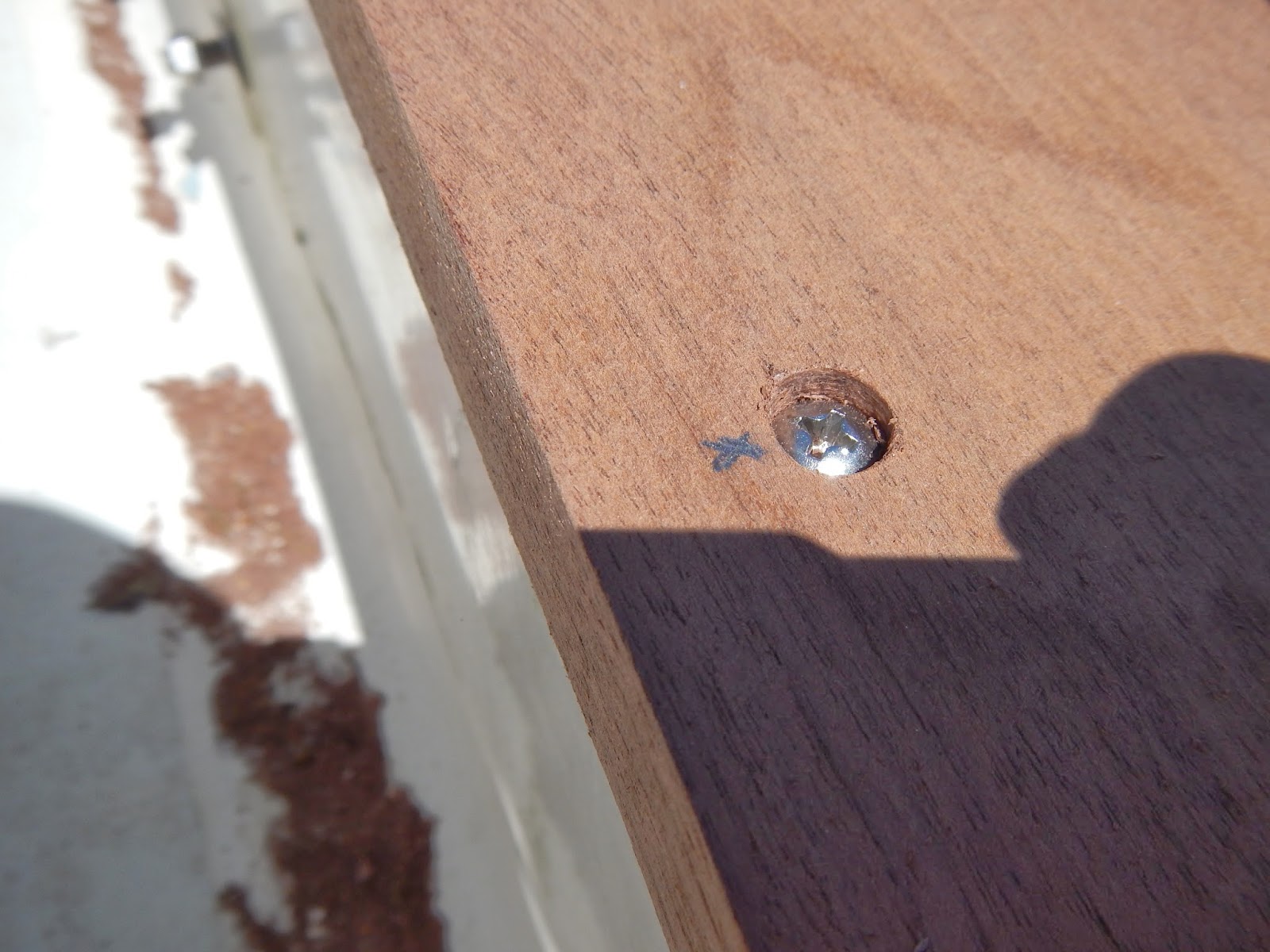 I used recessed 2" stainless steel screws to anchor the caprail on the bulwark. 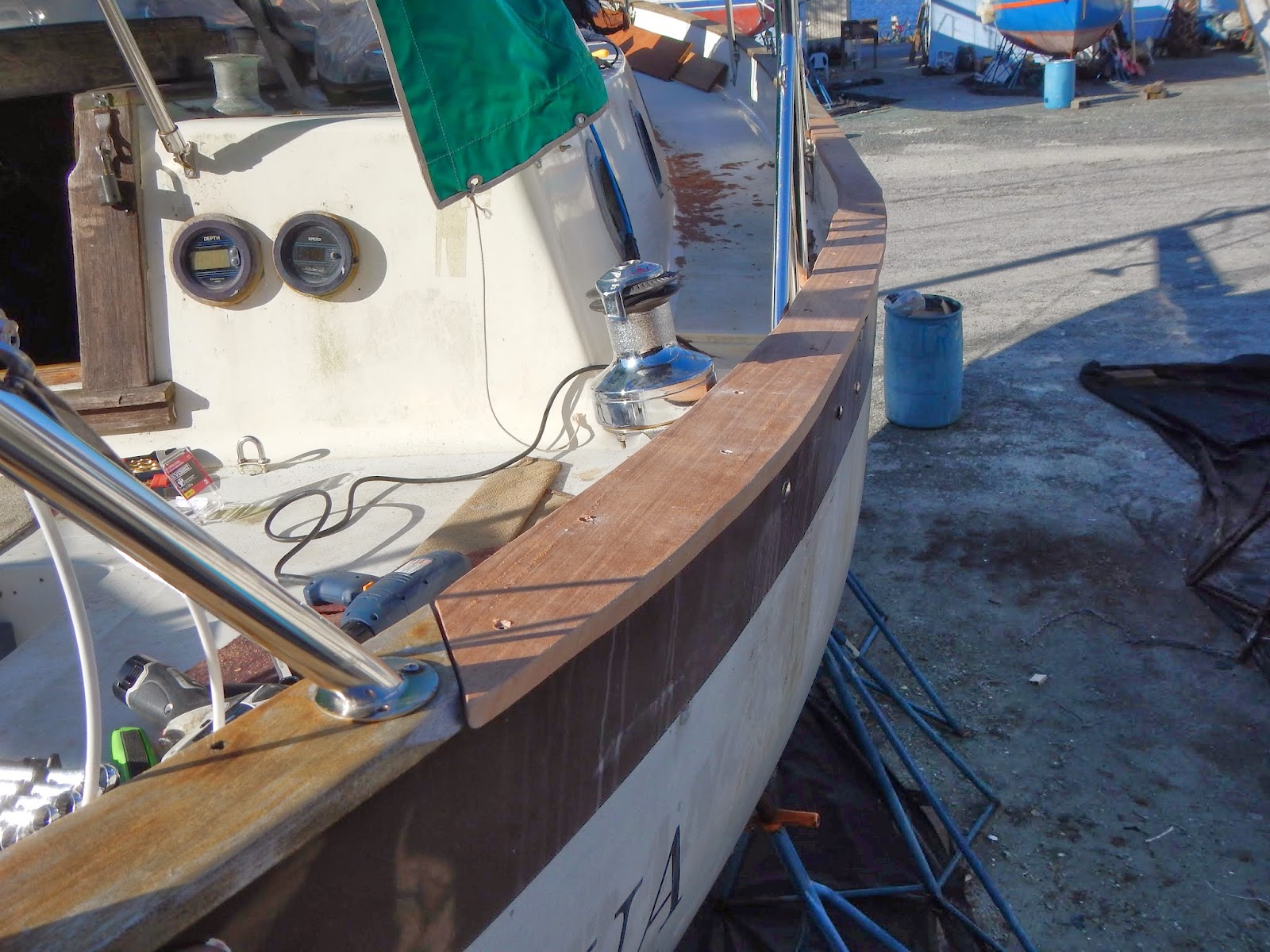 And there  above is the second piece down .................all ready for the genoa track which is due to arrive from Westsail Parts tomorrow. Actually, come to think of it, I have to seal it first. There are more sections of caprail to do, fore and aft and this wee project has given me confidence to tackle these, when I get a chance.
While I was outside, here are my new belaying pins in my old teak pin rail. Not too bad for my first ever attempt at using a lathe. Looks incongruous with 40 year old teak against new mahogany. 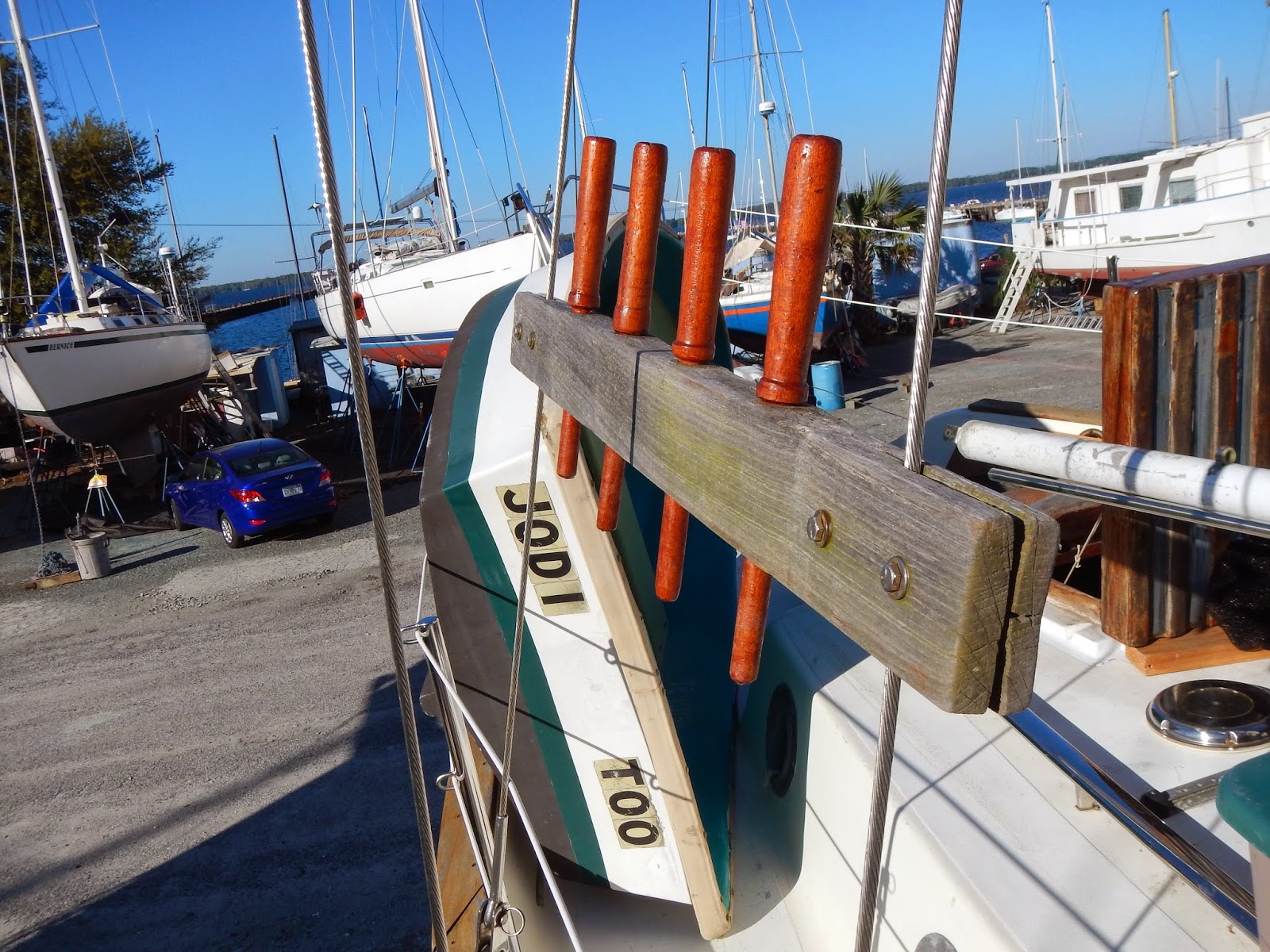 Just for kicks and giggles, I tried cutting some spare rigging wire I had on board with my bolt cutters. Not anything like easy to do. I think in an emergency, I shall first reach for a hack saw. 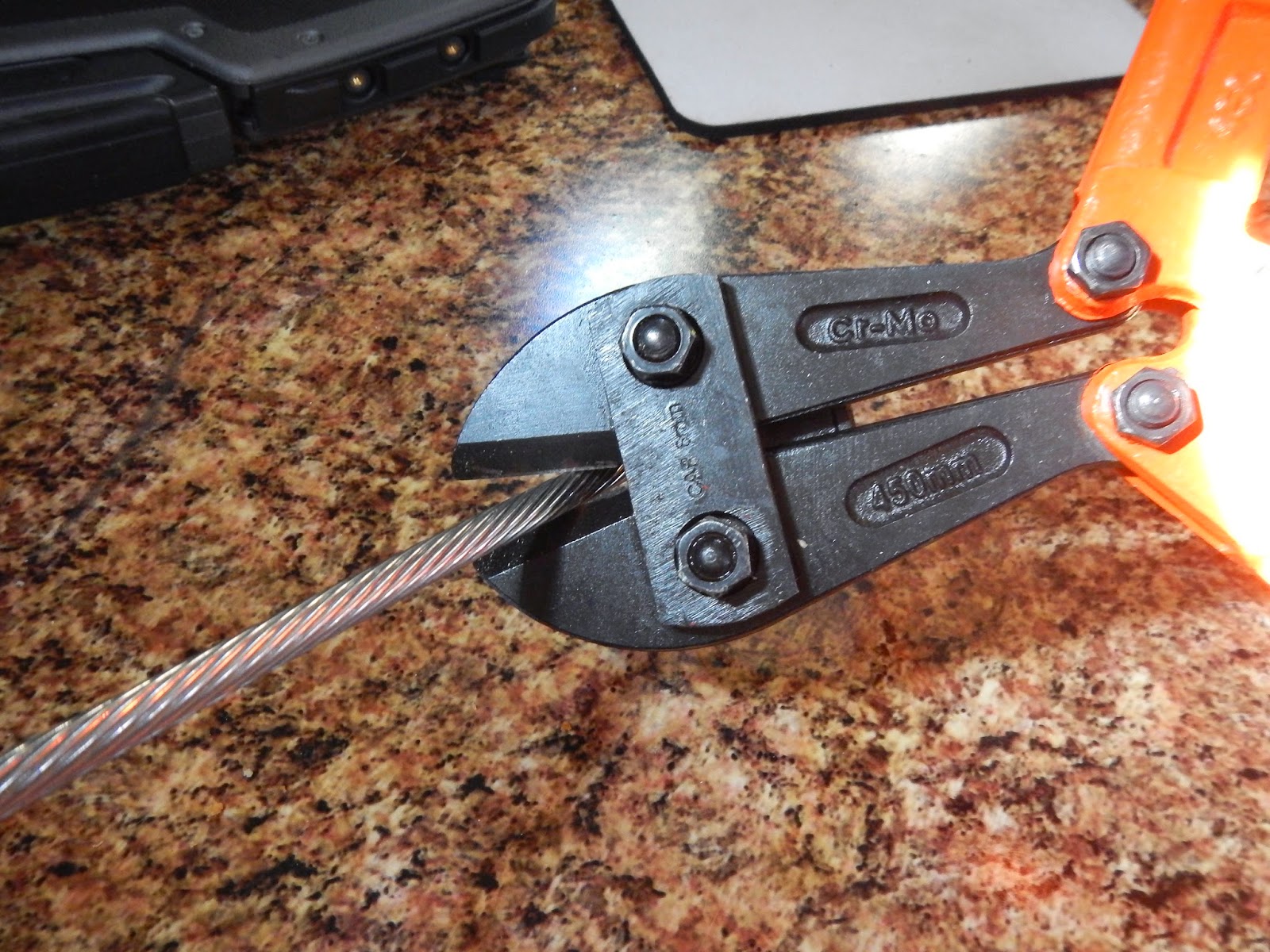 Have a look at the pin in the middle of the next photo. It is called a clevis pin. It holds the boom onto the mast, and as such is a critical part on the boat. Anyway, after the rigging project, I could not find it for the life of me so I had to order a new one (and a second as a backup) for $45.......not cheap. 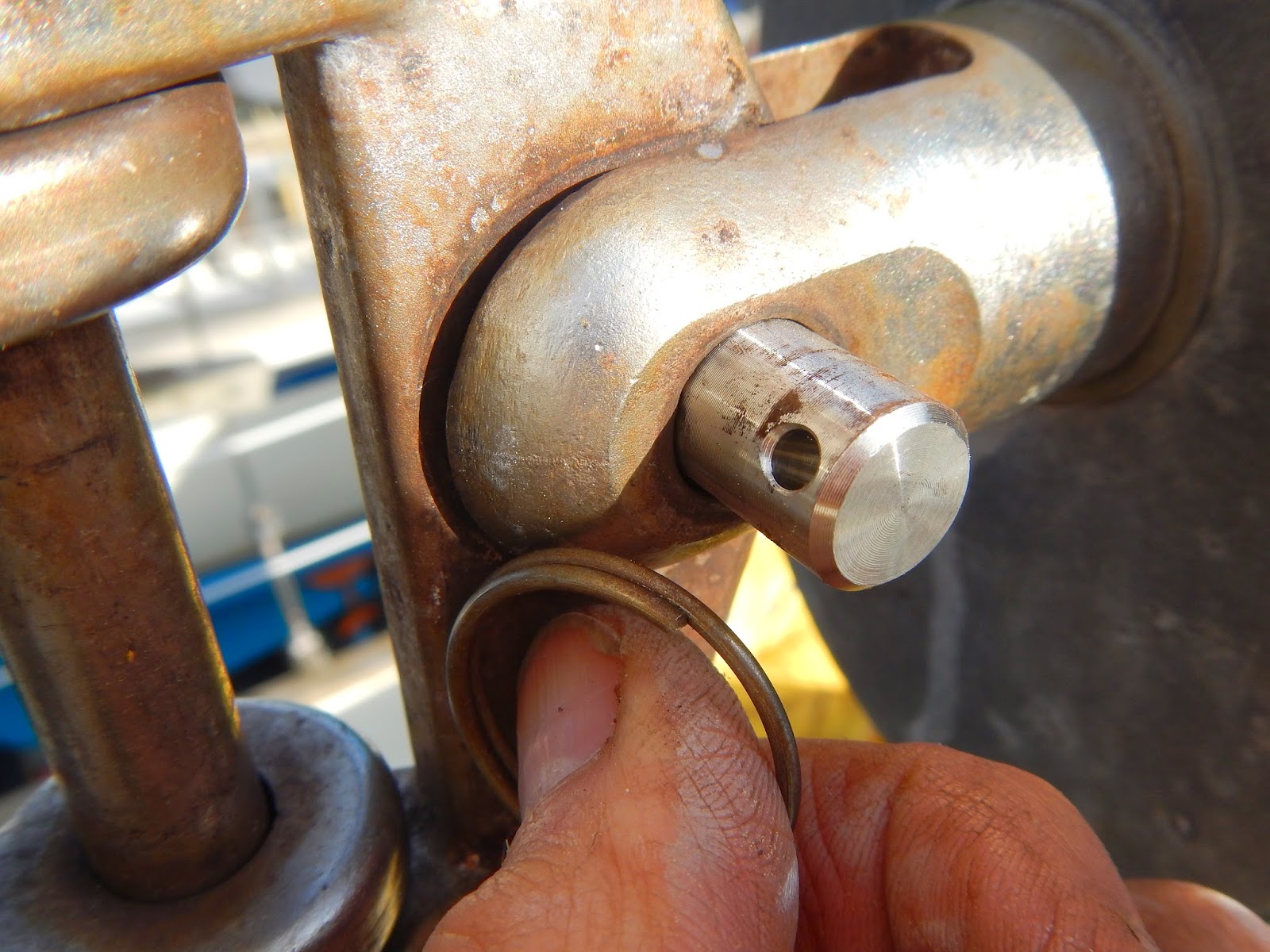 I bought this plastic base to go in the bottom of my kitchen sink to improve it's looks. Even barkeeper's friend wasn't enough to make it look presentable. 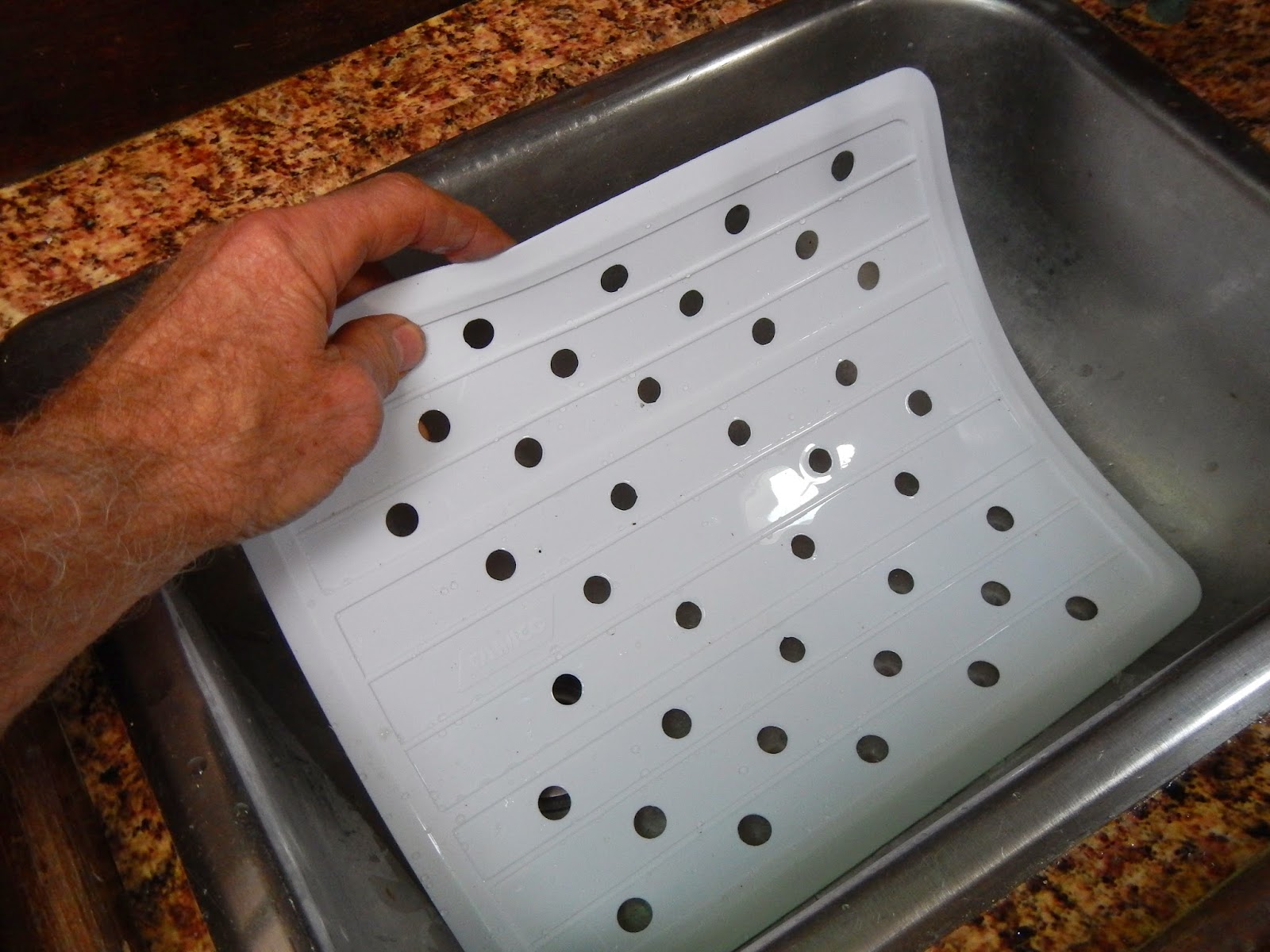 I used some Velcro to put some family photos up on the wall to give it that lived in feel. 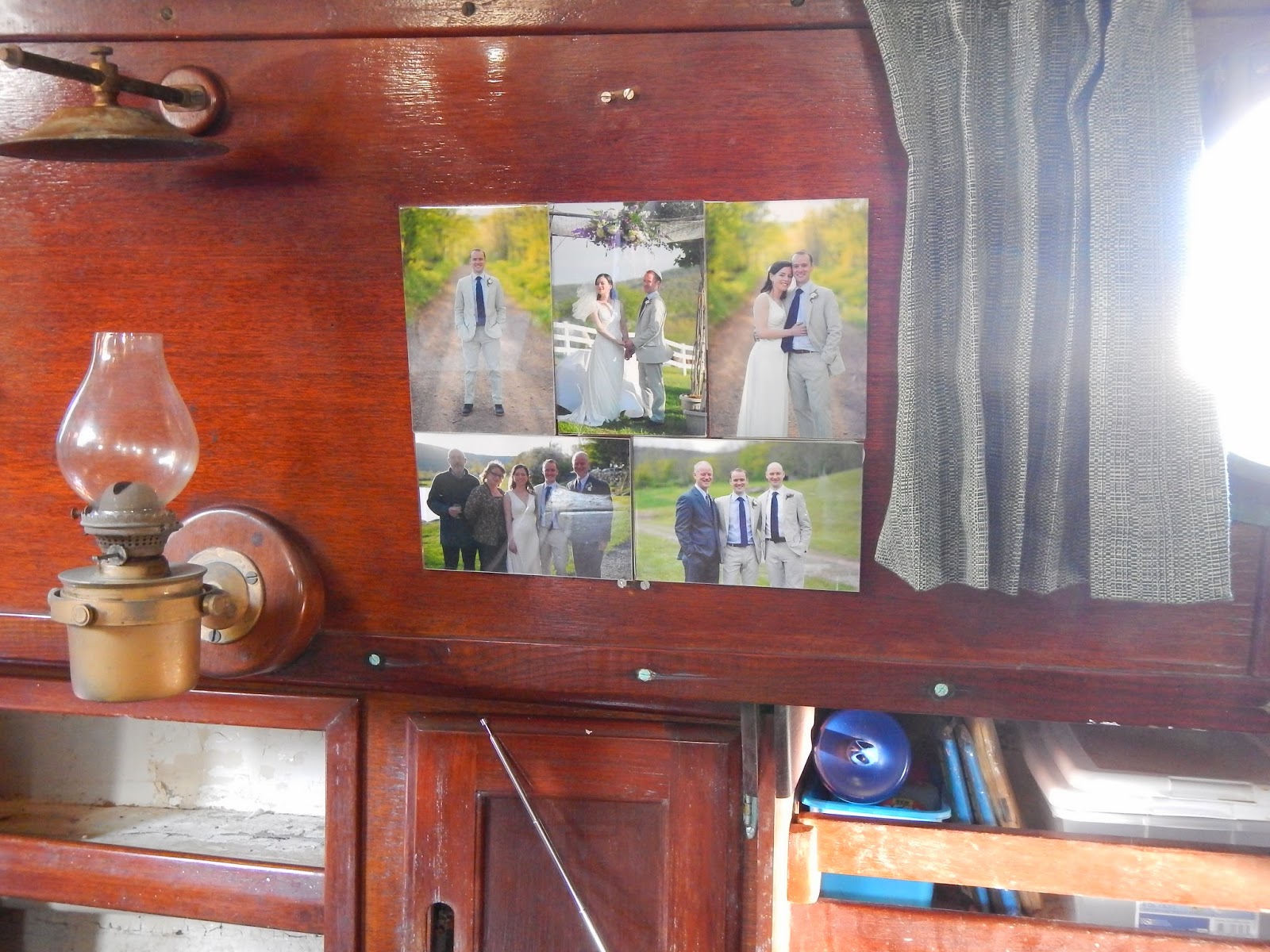 I bought a propane pressure gauge from home Depot to install on my tank to do a drop down test. 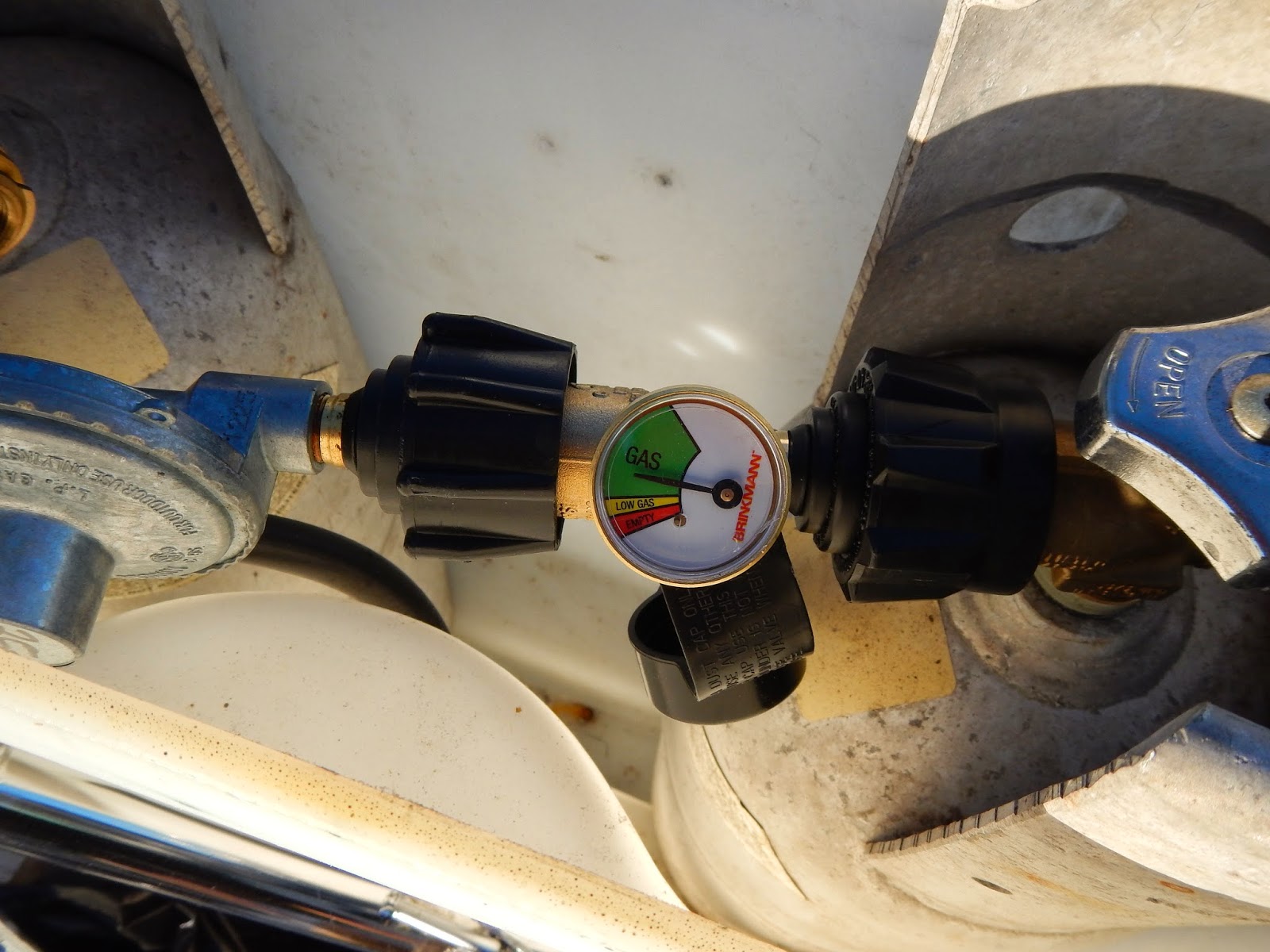 So you can imagine my horror after installing it to find the pressure dropping down to empty only 3 minutes after turning off the gas at the tank. All day I was worried  sick about it, conjuring up all sorts of burned charcoal scenarios. I drove to the store tonight and bought some dish-washing liquid to spray on all the joints to locate the cause of the leak. However I never got to use it. I decided to use the stove for my dinner and when I did the leak down test once more there was no leak!!!!!! Weird. I am not sure of the reason. It could be that it is a lot cooler now or it could be that the teflon tape has expanded under pressure..........I do not know. All I know is that I will continue doing these drop down tests until I am convinced that it is safe. Phew!
For my dinner tonight I splashed out and bought some halibut. 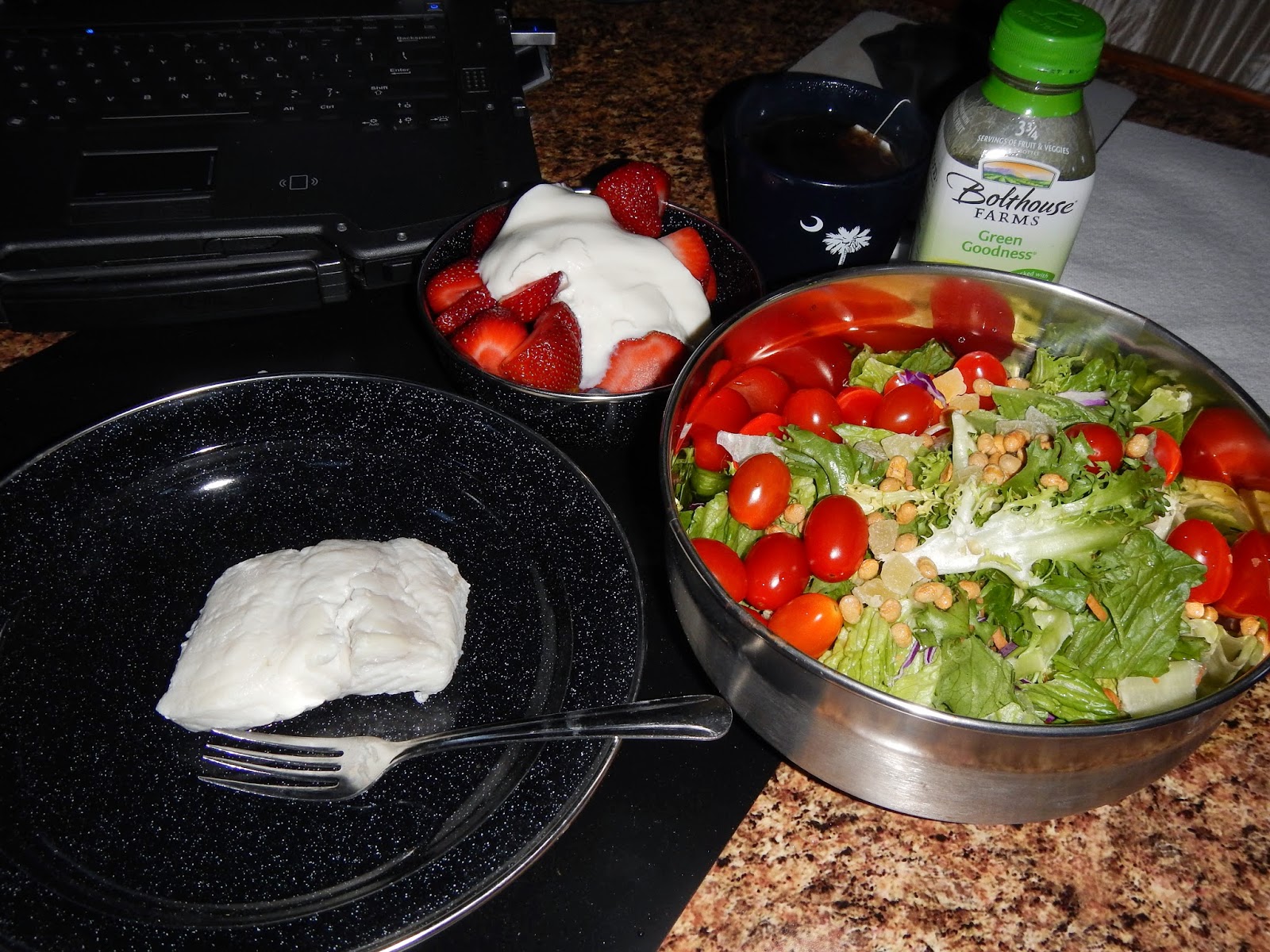 It was delicious.
Posted by Onapua at 9:57 PM