After suspecting problems with my transmission, I decided to take a look at it. 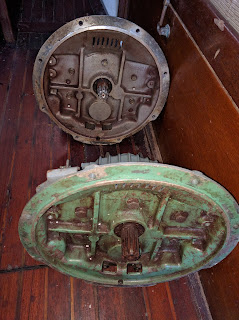 I pulled it out but could not find anything wrong with it. I have a spare one that I bought 18 months when I had a problem with it slipping but I decided to stick with the one I am using. It is a hassle to get it out. You have to undo the 4 bolts on the prop shaft and then 8 bolts on the outside edge of the transmission all of which are rusty as can be.
As well my Trace charge controller decided to play up again today probably because of all the rain we had over the past 3 days so I had to run my generator for a couple of hours. I will have to take a look at getting a new one here on the island or shipping one here to me from the USA.

PostScript; After checking my fuel levels I worked out what the problem was. The engine died because of fuel starvation, not because of any transmission issue. I found that my Port fuel tank was empty and my starboard tank had 10 gallons left. The curious thing though was that when I undid the cap on it there was a "thunk" and a rush of sucking air which means that it was air tight. I was under the impression that there was a breather tube on it. I was able to calculate quite accurately as well, the rate of fuel that I had used on my way across. I did 78 hours of motoring at 2000rpm into a small headwind and used 55 gallons of fuel, which means I use about one gallon every 1.4 hours. Good to know.

I did order a replacement charge controller from defender. It was not quite the one I wanted because it doesn't have an equalization mode on it but I was able to talk to them and get it sent by FedEx which turns out to be very important if you want to get anything out of customs here on the island. Only time will tell. I had it sent priority and it is supposed to be here this week.
Posted by Onapua at 5:10 PM