It took me less than 6 hours yesterday to fly from Hampton back to my boat in Stuart. Compare that to more than a 6 day journey, sailing back up there starting probably tomorrow. 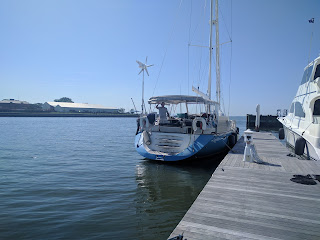 I said goodbye to Bill on his beautiful boat Sapphire and was greeted by a virtual ghost town when I arrived back to my mooring. 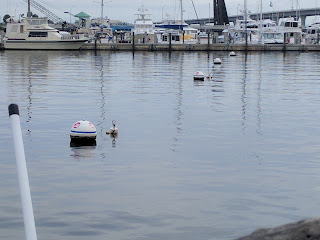 The internet here at the boat is wonderful because there is no one else on wi-fi. Two weeks ago, these moorings would have been gone in an hour. It is all to do with the June first date for the insurance company's start to the hurricane season. So let's talk about insurance. The fact is that most cruisers have a significant percentage of their overall wealth tied up in their boat. Plus many of them get a loan on it to pay it off like a mortgage so they are required by the bank to purchase insurance. So they have to have FULL insurance coverage on their boat to protect their investment. Now most insurance companies require boats to be north of Florida during the hurricane season from June to November. Also to escape the heat of summer, you get a huge exodus every year of boats going north up the ICW (intercoastal waterway) and the same boats going south at Christmas time.

For my part, I have chosen to only get liability insurance, partly because as a solo sailor, no insurance company will touch me with a barge pole. Now I do watch the weather like a hawk especially at this time of year. And even though the insurance companies have their line in the sand at the Florida Georgia border, I like to be north of cape Hatteras especially during the peak months of August and September. The other thing is, I like to sail offshore rather than go up the ICW because it is a lot faster and to my mind a lot safer. I know that it sounds counter intuitive, but in actual fact, there are a lot more ways to get into trouble on a boat when you are near rocks and jetties compared to when there is nothing else around you to hit.

The first thing I do whenever I get back to a shut up boat after a long absence is just to sit in the companionway for a minute or so, and sniff. Yes sniff! I have a very sensitive nose and I can't stand the smell of an old boat, the head or diesel. Well I can say for the first time I can ever remember, that the boat had virtually no odor. Just a faint hint of the "damp rid" bags and the blue head tank solution. As well there was less than a cup full of water in the bilge despite it having rained here considerably while I was gone. I can put it all down to the work I did clearing up leaks on the boat and especially raising the Bob stay attachment, out of the water. I did this mainly by transferring my spare anchor and chain from midships to the stern locker.
Posted by Onapua at 9:56 AM