Waiting out the weather

We went north yesterday to escape some bad weather and fortunately it has moved mostly south of us. We got a little drizzle last night but nothing like the 2 inches of rain predicted for where we were night before last in Vava'u.

Steve has several flags displayed on our flag halyard. 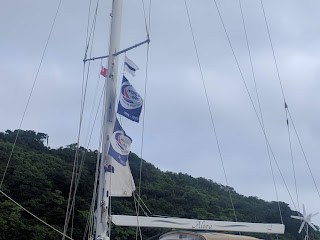 The red flag on our starboard side is the Tongan flag. Convention in every country requires each country's flag to be the highest on the starboard side. The only other situation is when you first enter a country, you must fly a yellow quarantine flag instead of the country flag.
On the port (left) side of the boat is first his New York boat club flag, the two ARC flags and finally the NZ one indicating that I am onboard. 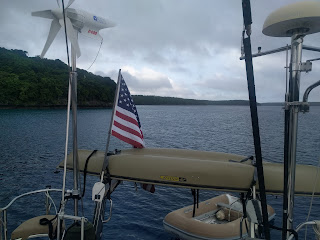 The final flag is the American flag on our stern where a lot of boats like to display the flag of the boat's country of registration.
Posted by Onapua at 3:23 PM