A weather window has opened up this afternoon for me to get to New York so i plan on leaving with the turn of the tide at noon. 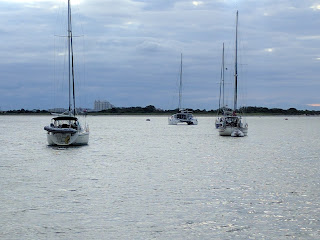 I woke up this morning and was surprised to see that good friends on s/v Destiny had pulled into the anchorage in front of me. One of the best things about cruising, is that you can travel all over the Caribbean including Cuba and have good times with friends that also show up in other places.

I wanted to put down into words my experience with 3 separate thunderstorms over the past 3 days, while they were still fresh in my mind. The first was while I was actively sailing, the second while I was motoring and the third was while I was anchored. I have had many experiences with squalls over the years while sailing, some bad while others were manageable, and if you are a boater for long enough, eventually you will run into these things. I must say that thunderstorms were in the weather forecast and I knew ahead of time that there was a good chance that I would encounter a storm or two however I had underestimated the ferocity of the conditions when they arrived. I want to add that I have no photos of the conditions, partly because I don't like taking my electronics out in the weather, but more importantly, because I was too busy concentrating on handling my boat.

The first storm was near the mouth of the Chesapeake and it was a doozy. I was lucky that it did not happen a couple of hours later when it got dark, or near the bridge because I couldn't control the direction of the boat even if I could see more than 50 feet in front of my bow. Because I had the internet, I could see it coming on the radar, in fact I had just dodged another one an hour earlier. In hindsight, I should have sought the safety of an anchorage, which was what I had originally sought to do, but I felt confident after escaping from the prior storm. I also thought that the combination of one reef in the mainsail with my staysail to balance the boat would be good to handle the conditions. Boy was I ever wrong. I had 50-60 knot winds for what seems like the longest hour of my life with torrential downpours and lightning. I let out both sheets and steered towards the wind because I was on a lee shore and ran the engine to keep the boat from being broadside to the waves. The sails and rigging got a good flogging and you have to marvel at the strength of any boat that can be thrashed with seemingly zero damage.

The second storm was south of Ocean City, Maryland, out about three miles from the coast. Again I had the internet and thank goodness too because it was fast moving. There would not have been enough time for me to get my sails down, if I had not known ahead of time from the radar. Even the marine weather warning on my VHF, which is really loud by the way, was barely 5 minutes beforehand.  This time I wasn't taking any chances and I dropped all my sails and just motored. Again I headed up, lying about 50 degrees away from the wind so that I wouldn't get broadside to the waves when they built. This time I had white out conditions again but it only lasted 20 minutes or so.

My third storm was here in Cape May, where I am anchored directly outside the USCG training station. It was midnight when it hit, but I had been wakened an hour earlier by my anchor alarm going off and saw it on the radar so I got myself ready. I buttoned down the boat, got my foul weather gear on and started the engine. I had my 45 pound Manson supreme with 120 feet of chain and 2 snubbers which fortunately held. The wind was blowing me towards the rocky shore about 50 yards away and I had a 2 knot tidal current running sideways to the shore. I put the engine into gear and idled into the wind at the height of the thunderstorm.

All in all, I can thank my lucky stars that nothing happened during any of these events and I have learnt a valuable lesson in not taking any storm too lightly. I need to respect Mother Nature and listen more closely to the meteorologists. More than anything else, managing storms is all in the preparation.
Posted by Onapua at 8:38 AM