Spending another week at the boat

Road trips are pretty good in general but this one was not one of the best I have done. Most week day commuters are pretty good drivers and Florida must be a very safe place to drive because I saw lots of motorcycle riders without their helmets. I left work Friday afternoon and headed to my car which was loaded to the gunnels with stuff I had been collecting to take to the boat. I was a bit concerned leaving my car at the free car parking lots at the train station but I parked opposite the taxi stand and all was well when I picked it up. It took me 2 hours to drive the 50 rush hour miles out of town and it was hot as blazes because I didn't want to use the Air Conditioning, just in case the car overheated. Usually what I do is start driving, and when I feel tired, I pull over at a rest stop and sleep in the car. Well come 10 pm I started yawning a bit so I pulled over and grabbed my pillow for a kip. I fell asleep right away but a short time later I woke up and couldn't get back to sleep. The problem was that the car was so full that I had no room to move the seat and that left me trying to sleep, bolt upright. I went on like this for several hours and finally around 3 am I had the bright idea of taking a lot of the stuff out of the back seat and placing it on the roof so that I could recline the seat back. So I did get 2 good hours of sleep. That was followed by a Cracker Barrel big breakfast and Coffee. Mmmmmmm! They pulled the boat out of storage and into the work yard for me and once on board I discovered some good news and some bad news.
Firstly the good news. Despite the warning labels saying that those foggers that I let off back in May, did not kill recluse spiders, I discovered about 20 dead carcasses scattered about the boat like this one. 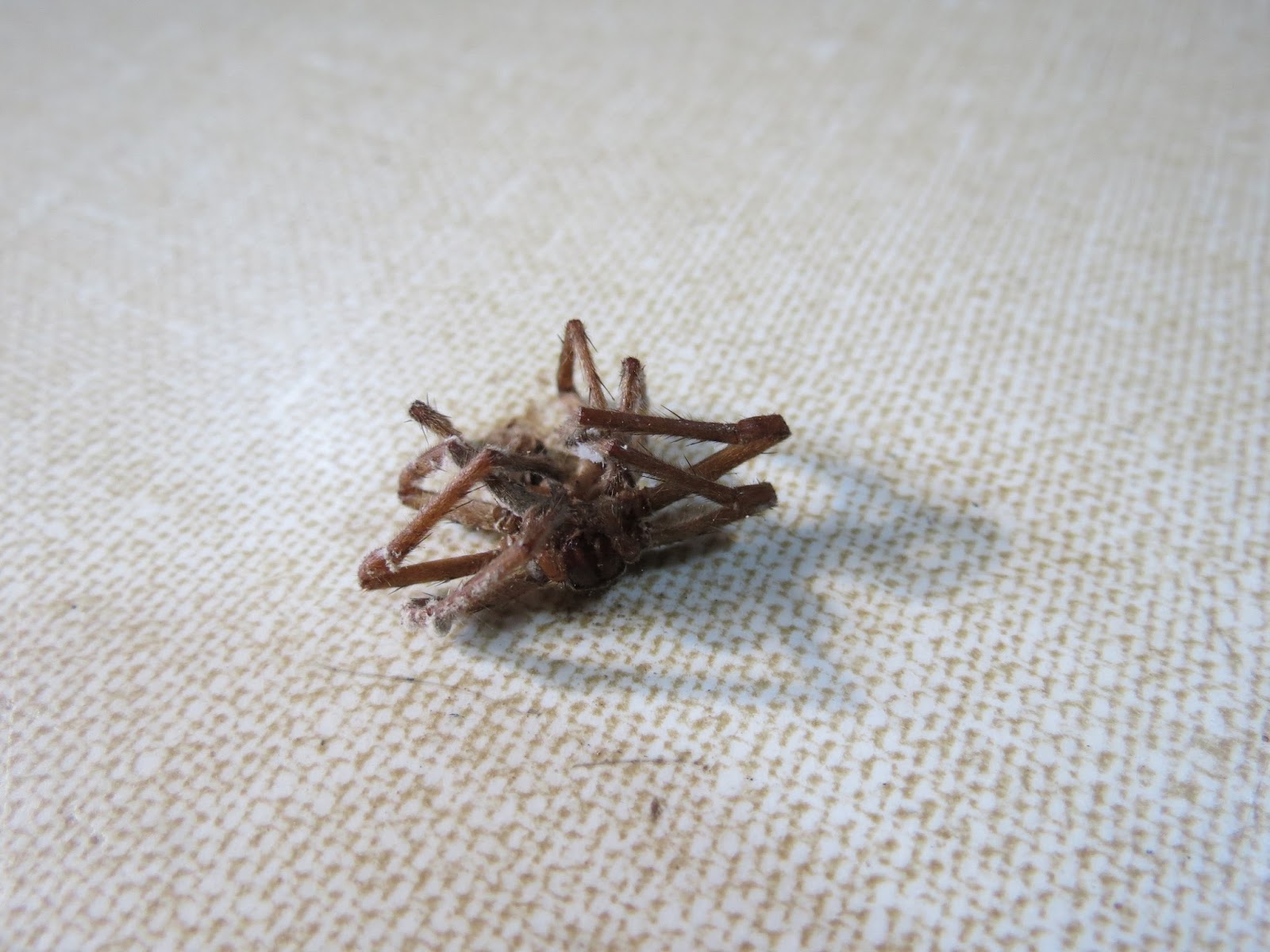 Next to the bilge where horror of horrors, it was overflowing. 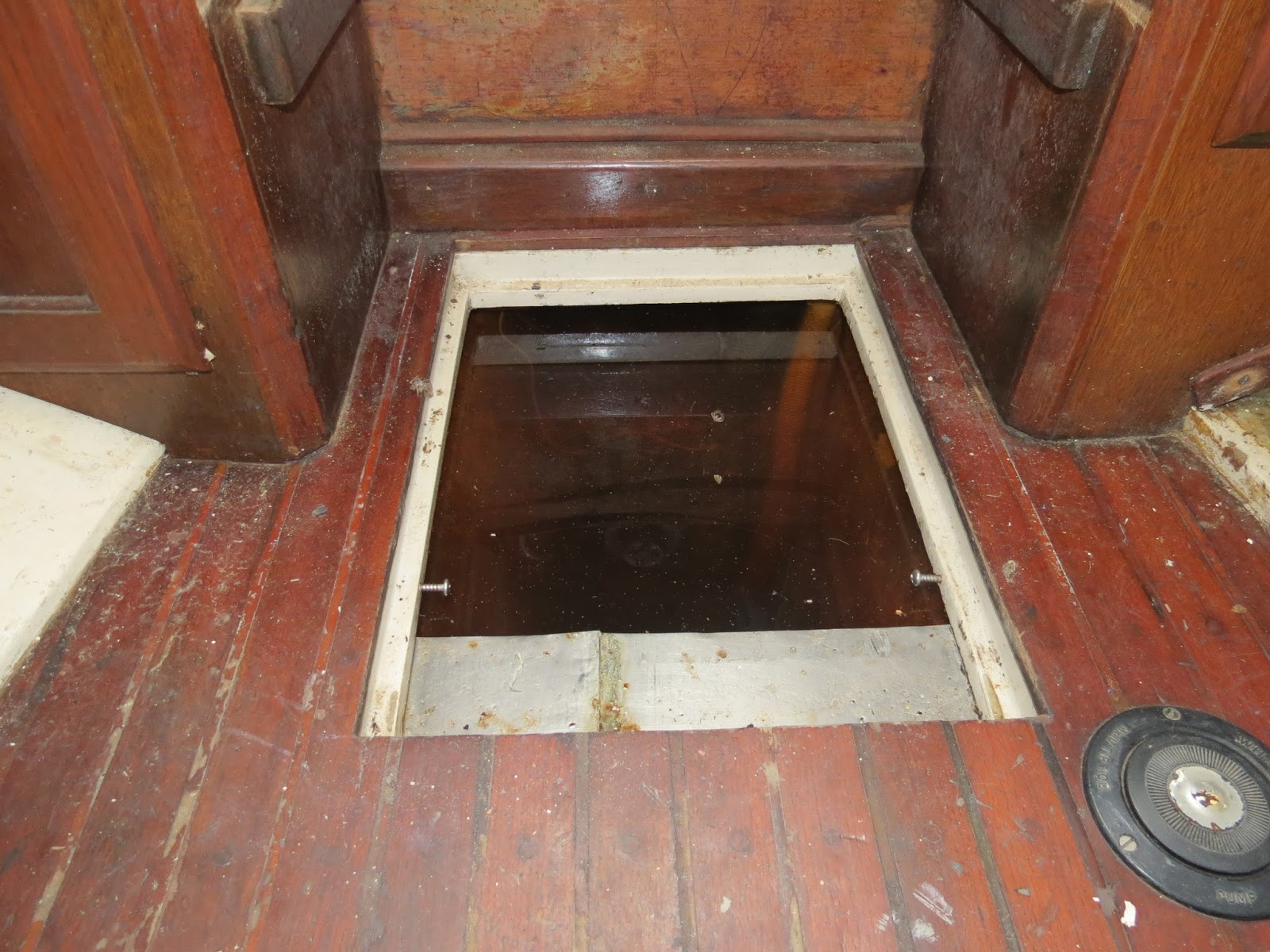 So all that work on trying to get rid of leaks was a total waste. It mightn't look like it but I must have dumped about 30 buckets of water out of that bilge. So back to the drawing board and I have my work cut out for me tracing leaks once more. I needed a simple project to start out and cheer me up so I took the LED lights and replaced out the incandescent ones left. 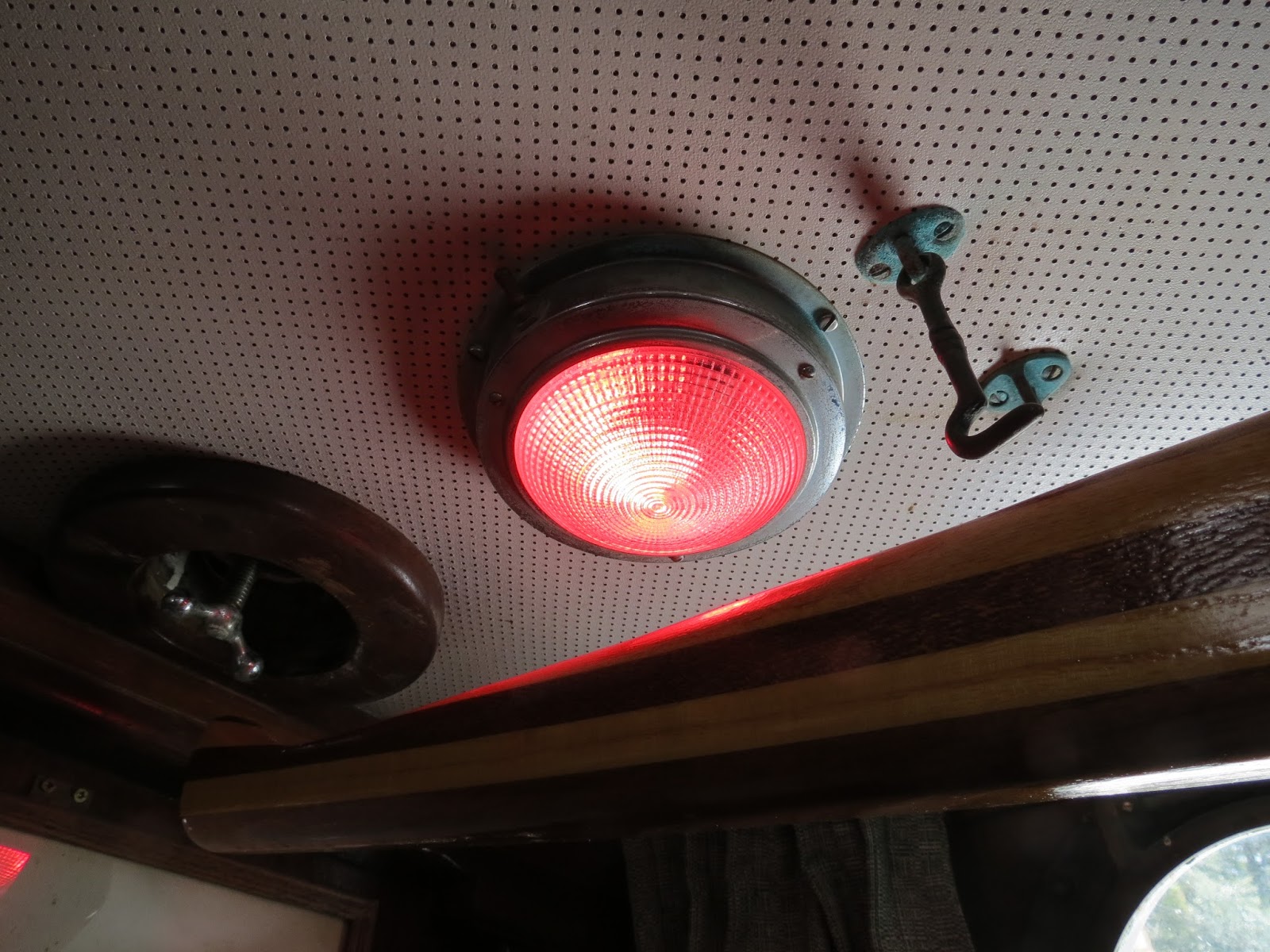 The red ones looked quite bright and in case you were wondering, they are red so that you can protect your night vision when needed. I have these in 3 places on the boat.
It was then that I need a nap in the V-berth because the humidity and heat had really got to me. I slept for about 5 minutes before waking to a loud noise and water on my face! 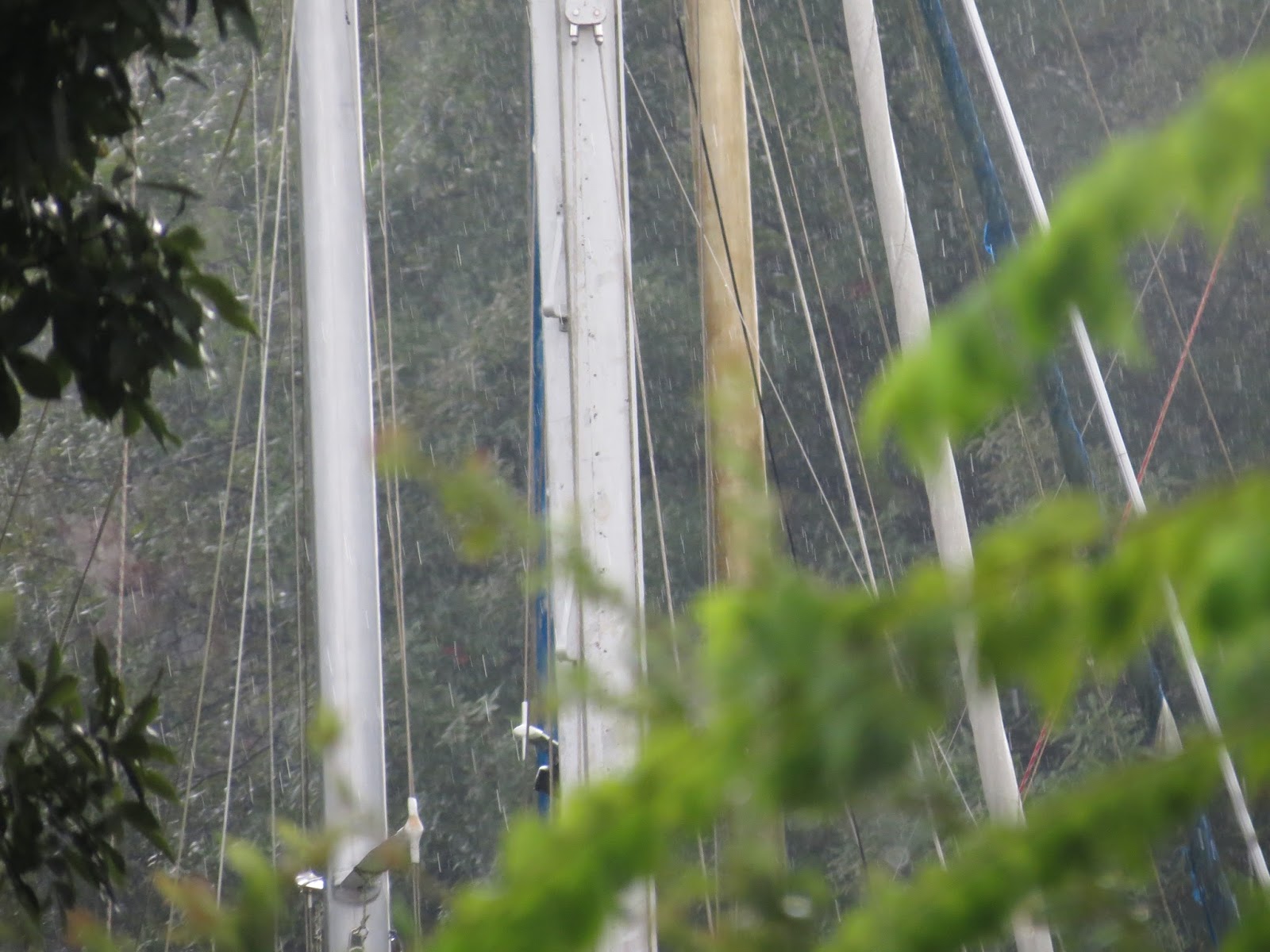 When I got up to take this photo it had stopped raining at my boat but was coming down in buckets, not 20 yards away from me. I had to do something about all this water, so I used my tried and true recipe for problem solving......go shopping. I headed off to Wally World and went up to a gum chewing teenager at the checkout and asked her in my very best English, where I could find a tarpaulin. This was followed by silence and a long "are you from outer space" stare. So then I asked her again.....Where can I find a tarp?......you know...T _ A _ R _ P. More silence and then she asked me what a tarp was. Grrrrrrr! So I explained as best I could what one looked like and finally Eureka, she said, "Oh you mean a tarp!" So I picked out a fancy brown one that was "heavy duty" and grabbed a bunch of other essential things that I had left at home, like a pen a paper (don't ask) and just as I was headed back I passed by that yummy Mexican place. Unfortunately being 5.30 pm it was packed, so I will take a rain check. 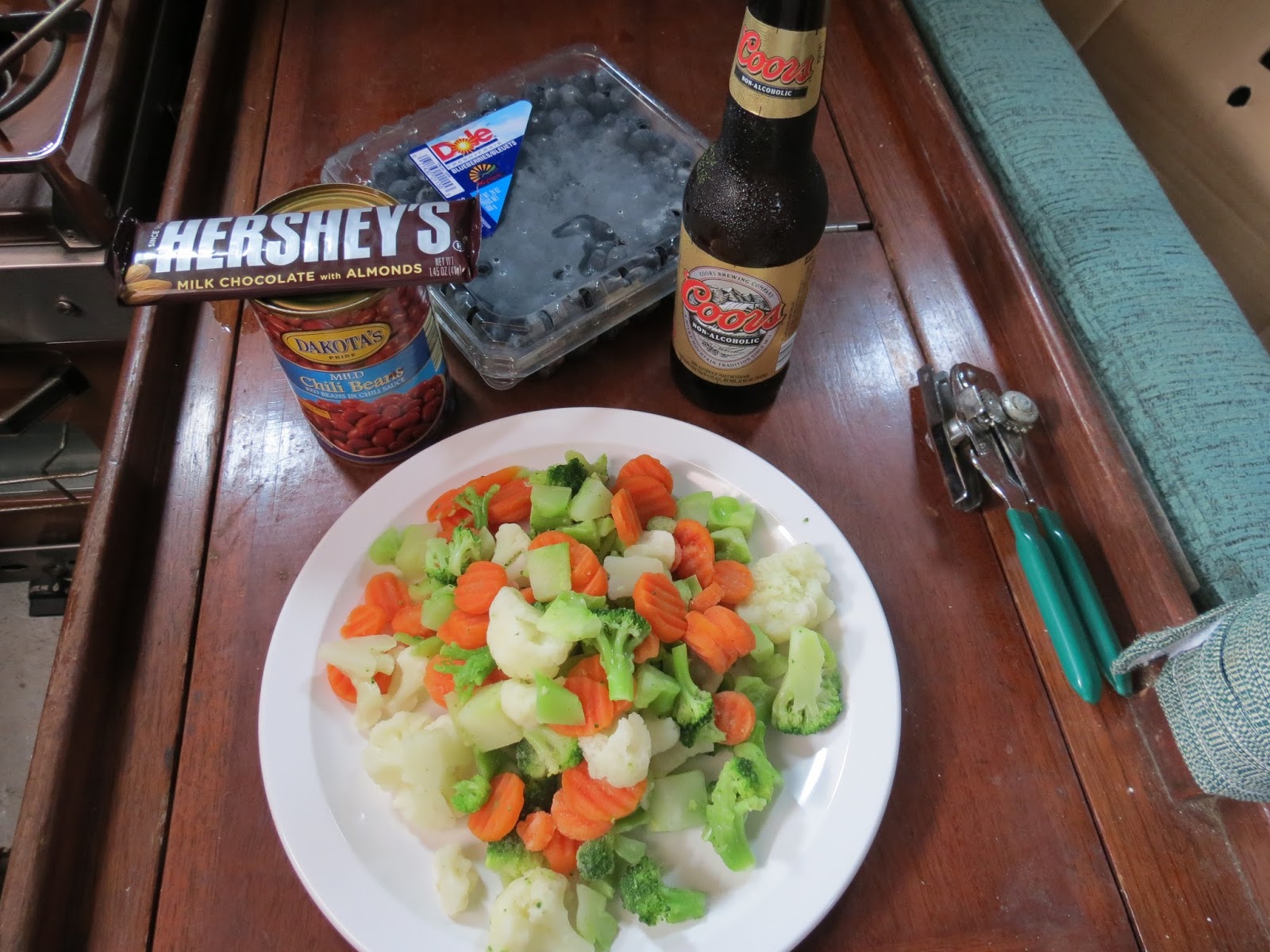 I actually did pretty well on dinner and afterwards I put the tarp up. 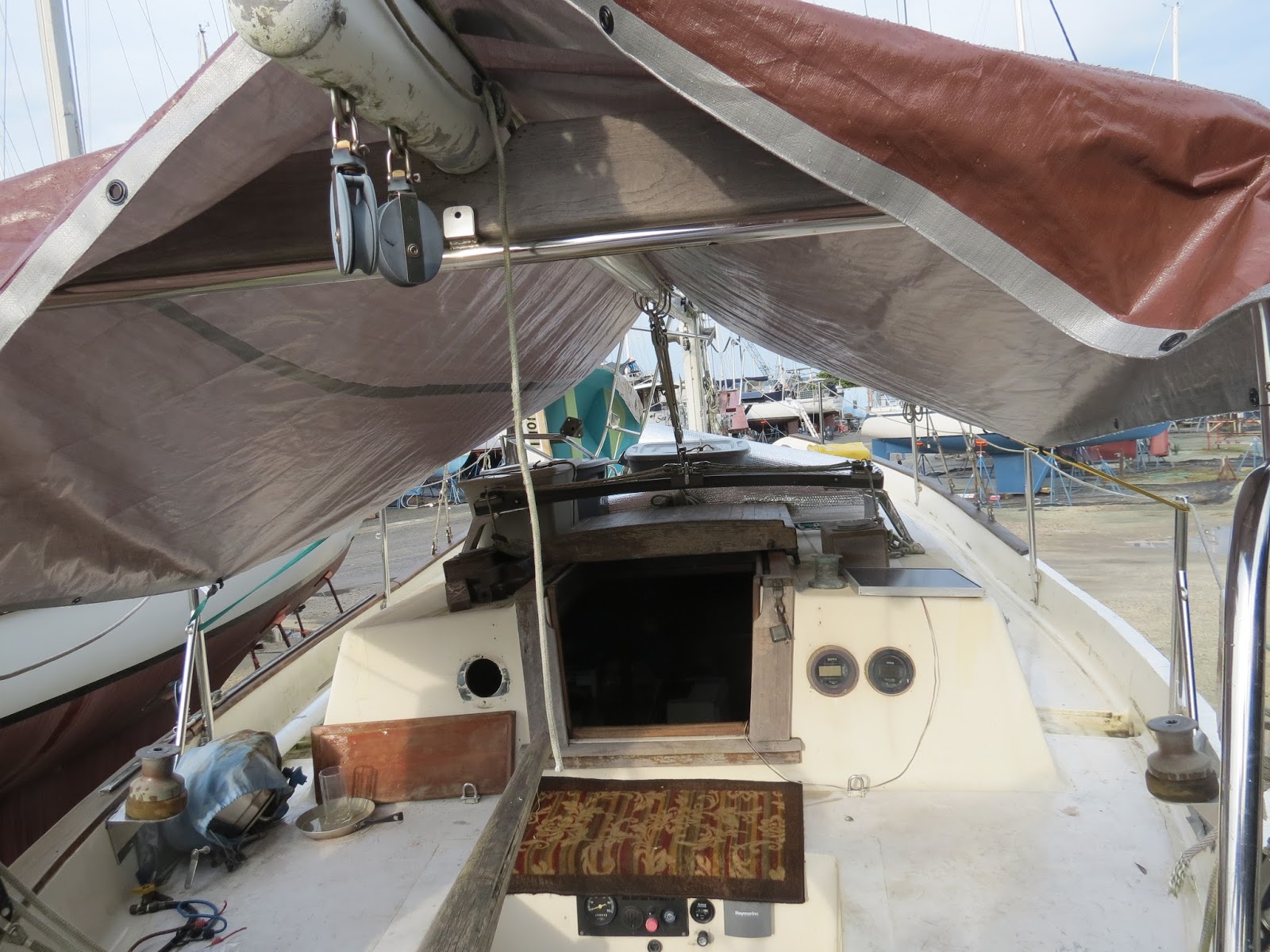 I need to be careful that I don't get too lavish, otherwise I will have to invite Kate and Willy around.
Posted by Onapua at 7:48 PM