Spent the long weekend on the boat and was thinking how much I was thankful for. for instance, little things in my life like Walmart for selling me a hooded jacket for just $20 to keep me warm and out of the rain this morning. I am grateful to my friends for letting me stay in their beautiful home. I am grateful for all the smiling gas station attendants who worked over holidays so I could drive to my boat. I am grateful to all the people who have helped me on my boat. But most of all I am grateful to all my wonderful friends, great work mates and especially my family. I love turkey and eating good food but when it comes down to it, my life is so much better because of my friends. We don't know how lucky we are.
Did a whole lot of little chores on the boat. The usual painting with Cetol is a given. 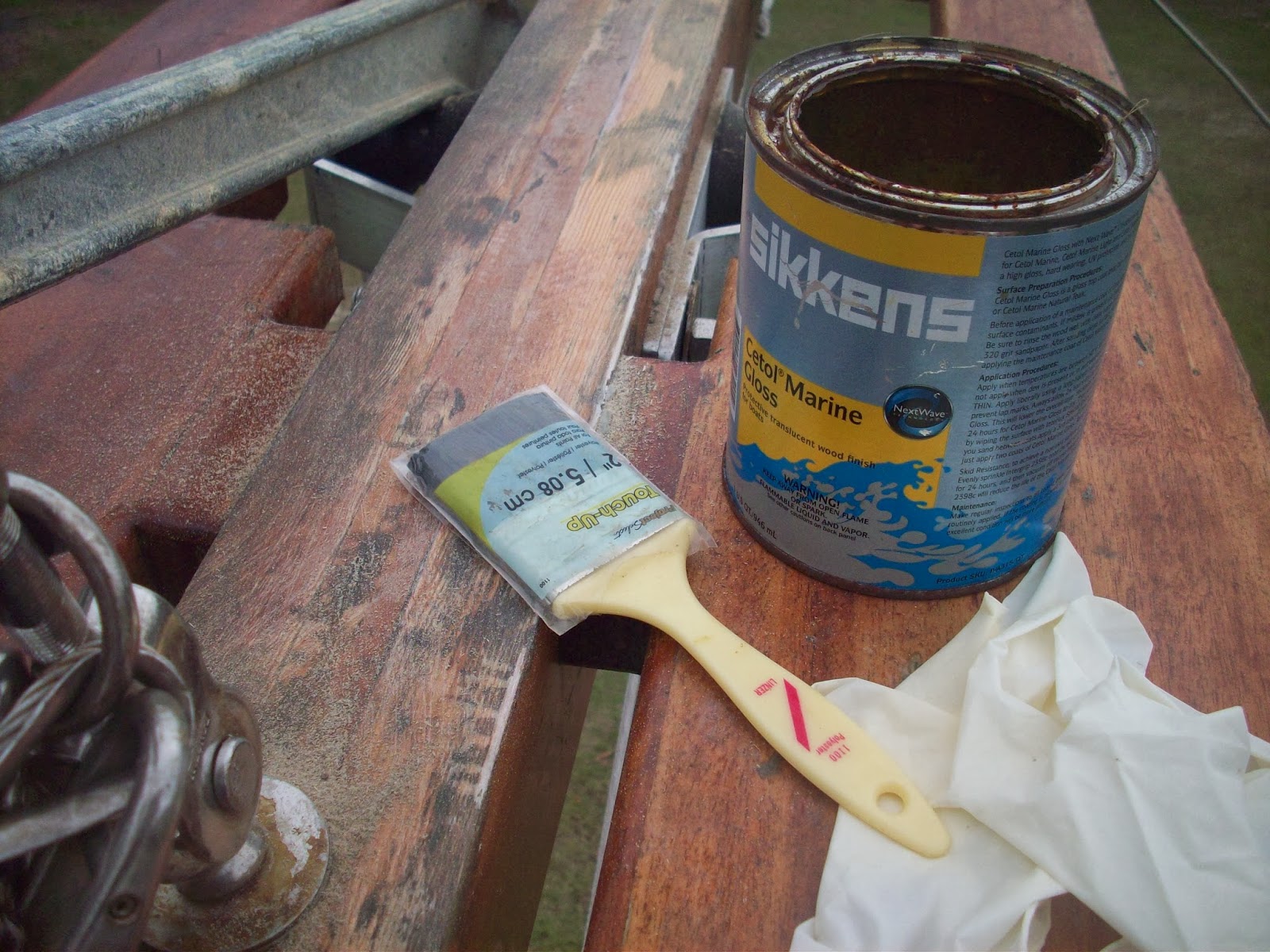 I was pleased that my bilge was again fairly dry although I seem to have a little leak in my water tank. I have 2 tanks with the aft one empty and the forward one nearly full with anti freeze in it. I fluffed around a fair bit with a tone tracer trying to find out why the port bank of lights in the cabin were not working. The tone tracer helped me find where the cables were under the headliner but it didn't solve the problem because the line is not broken. It has a leak to ground in it I suspect from a wet spot. The lights come on but just barely. I played around with my Y valve on my head and after 30 minutes, got it unstuck. It is a Marelon valve and after messing with it, I have decided that plastic is too flimsy for under water stuff.
Friday was a pretty day so I took all the sails out of the V-berth and measured them. Here are my sails with Luff X Leech X Foot.
Main 38X39 X15
Main 31.9X33X10
Drifter 43x34x17
Genoa 38x35x23
Genoa 37x37x22
Genoa 37x37x20
Genoa 37x32x19
Genoa 30x30x11'
Genoa 30x30x15'
Genoa 28x24x18
Genoa 27x25x12
Yankee 25X21X12
Yankee 20x14x12
Yankee 14x11x7
My sails are a little conservative and I may get a trysail yet. The boat came with just 2 sails, so my original plan was to buy a bunch of second hand head sails and a new main. Well I have spent about $1500 on all pretty good used sails so far and my next step is to try them out and see what ones I need to get rid of and which ones I need to get. I bought too many head sails by far. I drove over to Sailor's Exchange and bought a bunch of stainless steel pipe and fittings so that I could mount a couple of solar panels between stanchions on the aft port and starboard rails. I am not in a hurry for that project though because I am putting off buying electronic stuff until just before I go cruising. It is on my radar and I can at least I can get started with it.
One project I wanted to complete was installing a solar powered vent in the head. 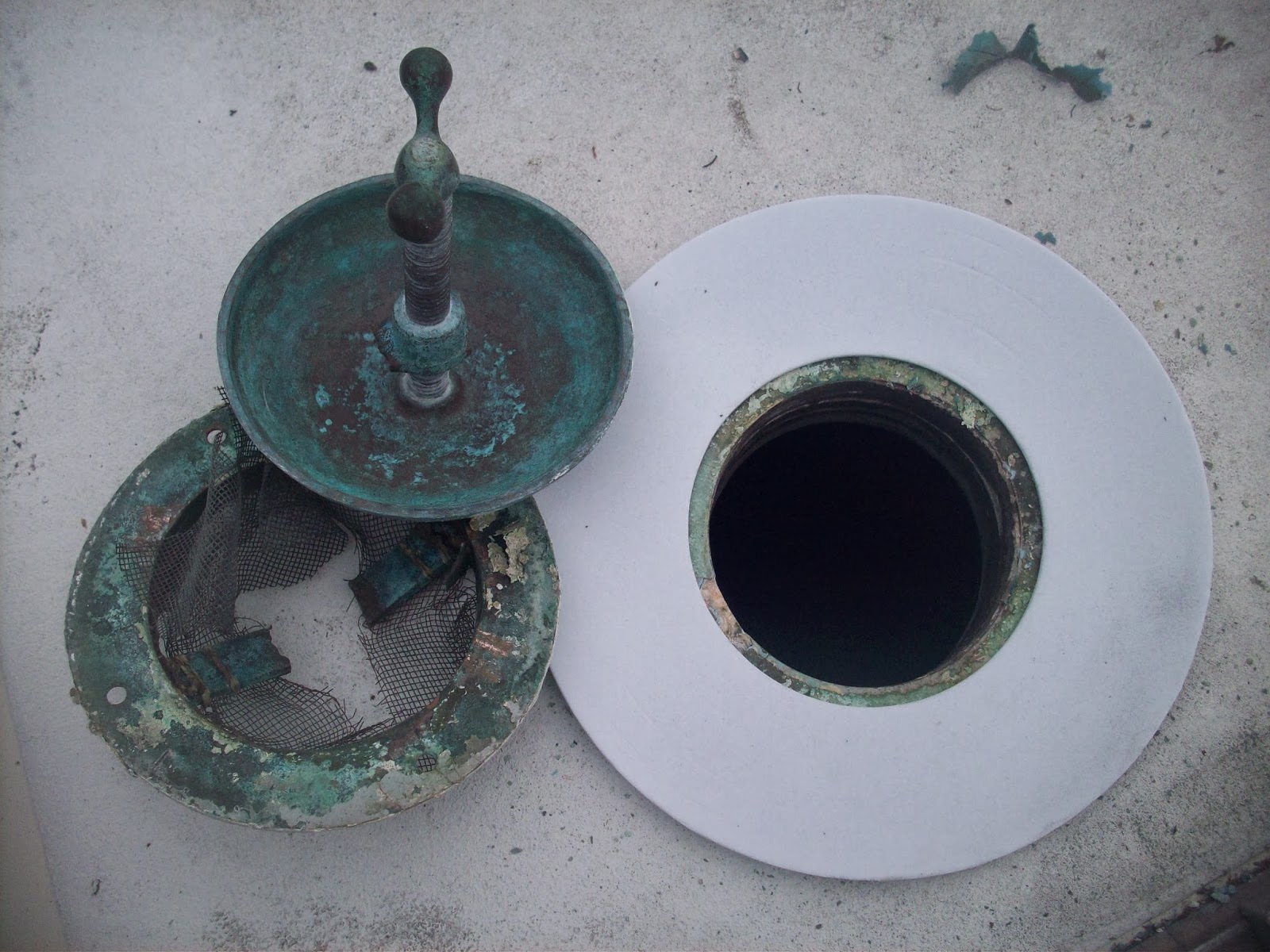 I had a broken bronze vent to be replaced and I was a bit hesitant about replacing it with a flimsy piece of plastic, just in case the boat turns turtle, but I had so much success getting rid of odors with the first one I installed in the aft starboard dorade vent that I decided to take the risk. 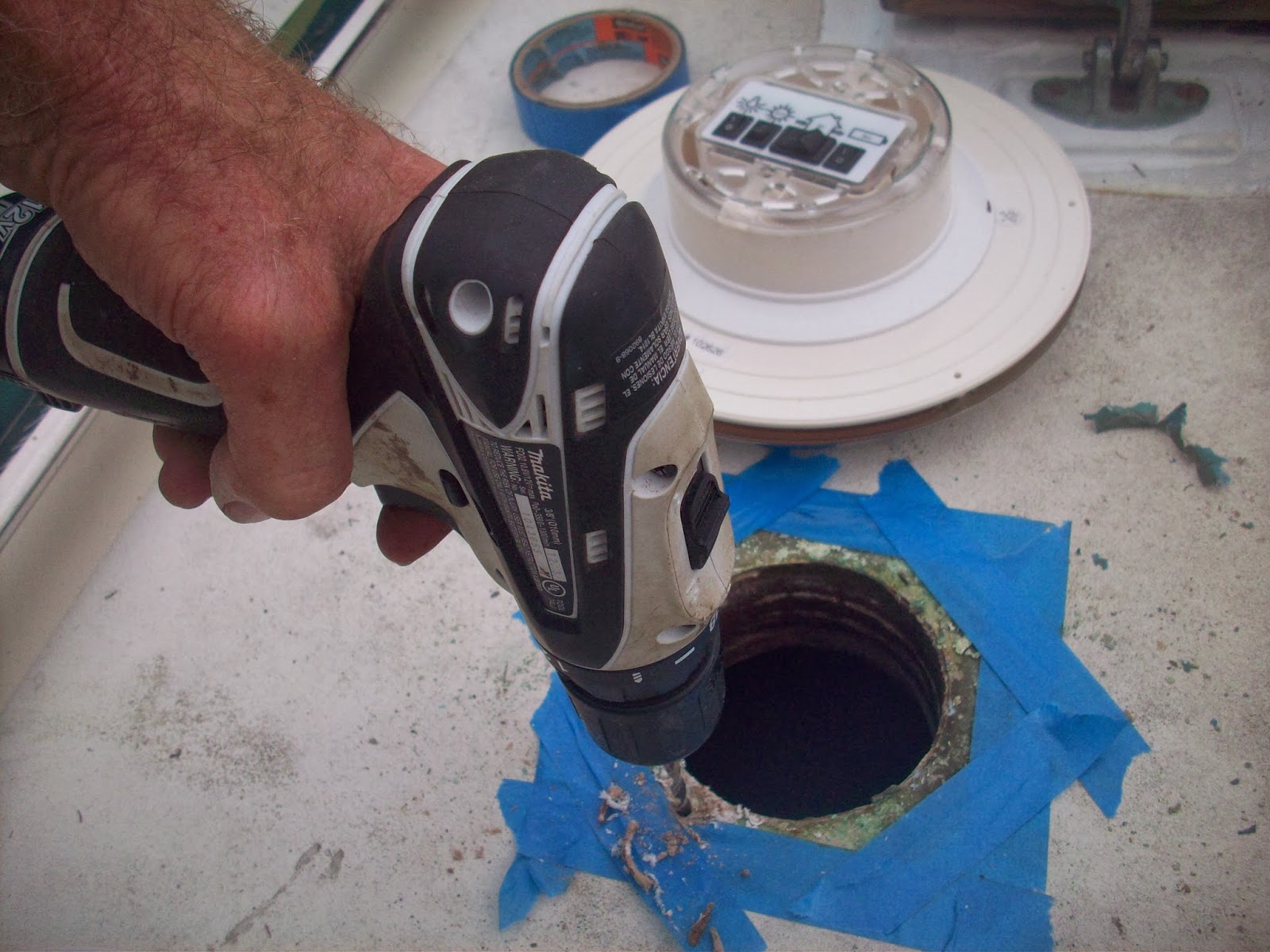 The hole in the cabin top had to be widened by just half an inch and I was hoping to use a saw to give it a clean look but the epoxy coat was like rock and ended up drilling holes. 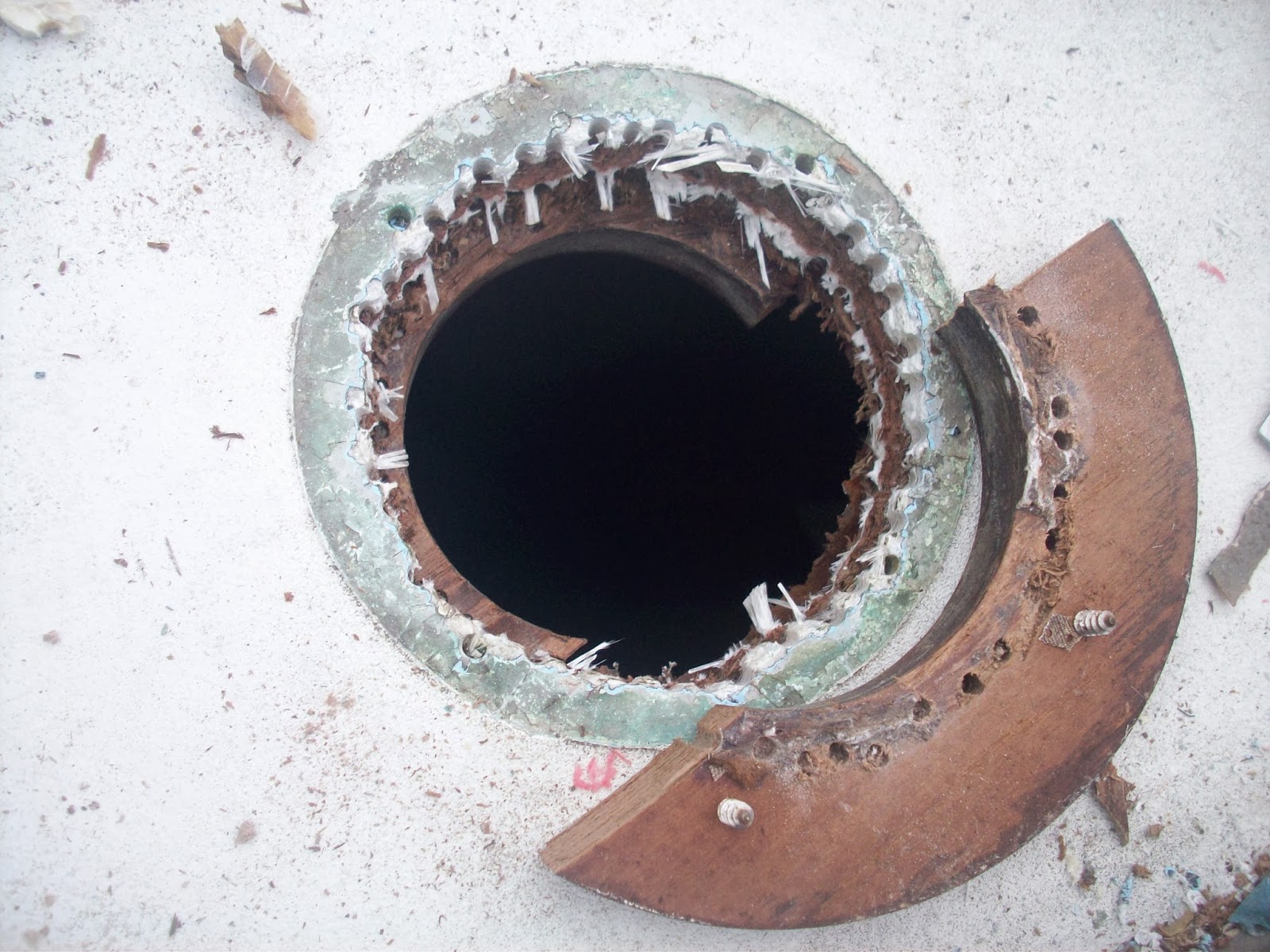 Not pretty at all and I ended up breaking the nice teak circle on the interior that I will take home to repair. 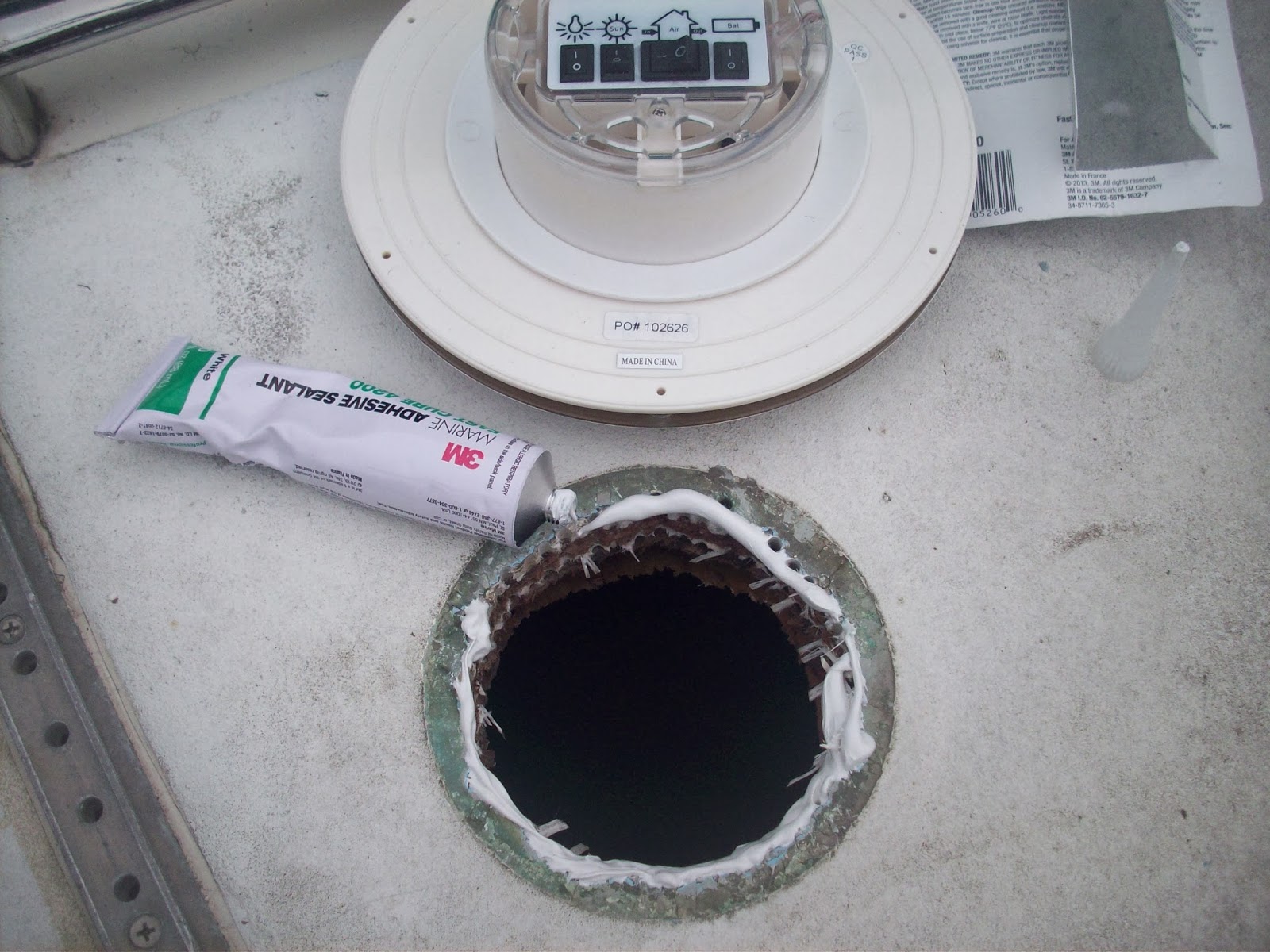 Lots of 4200 to seal but only time will tell if it leaks. One step backwards and two steps forward. 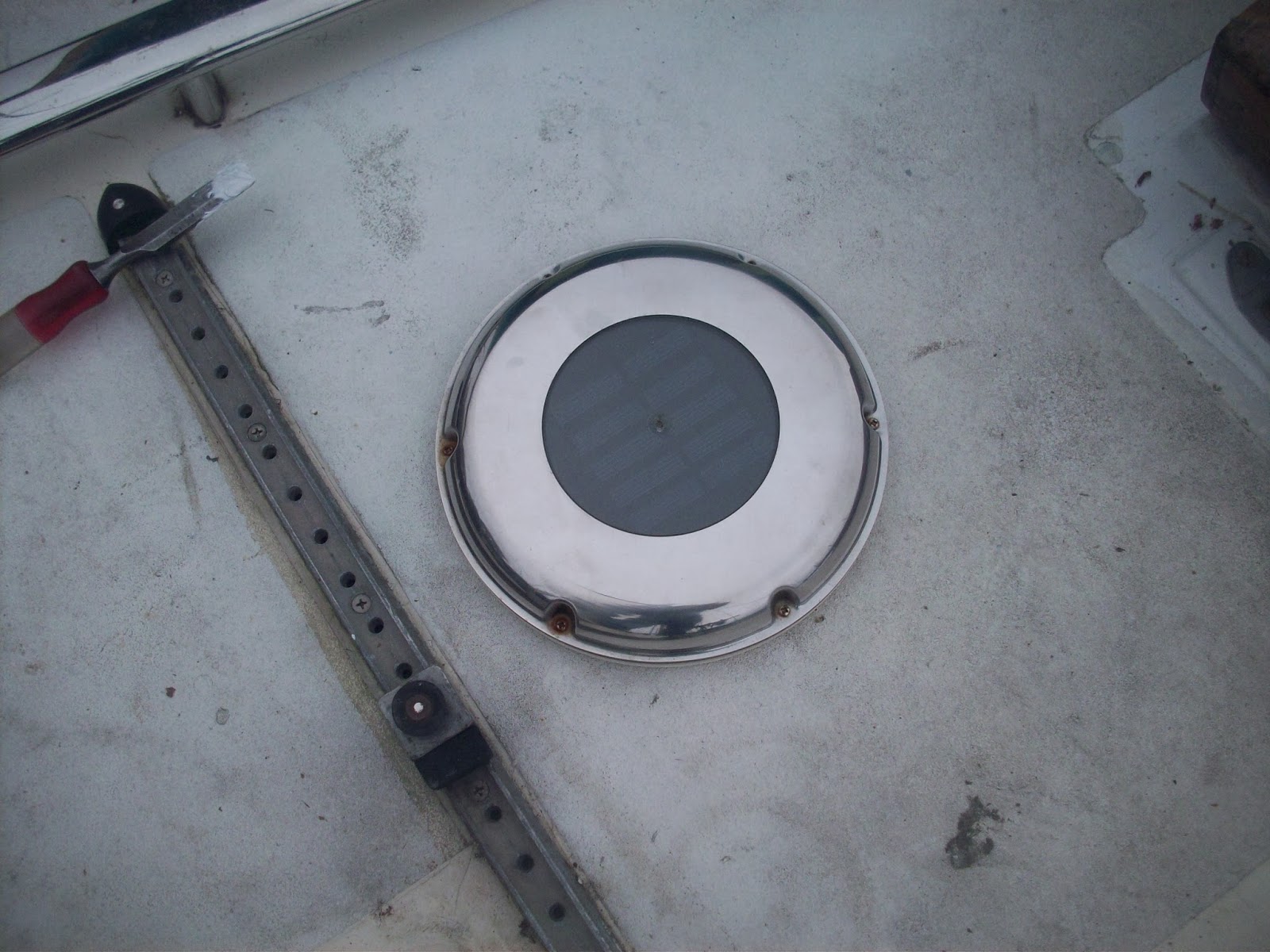 Here is my connection to the outside world for 3 days. A nexus 7, a Verizon Jetpack and a Ankor portable battery pack. 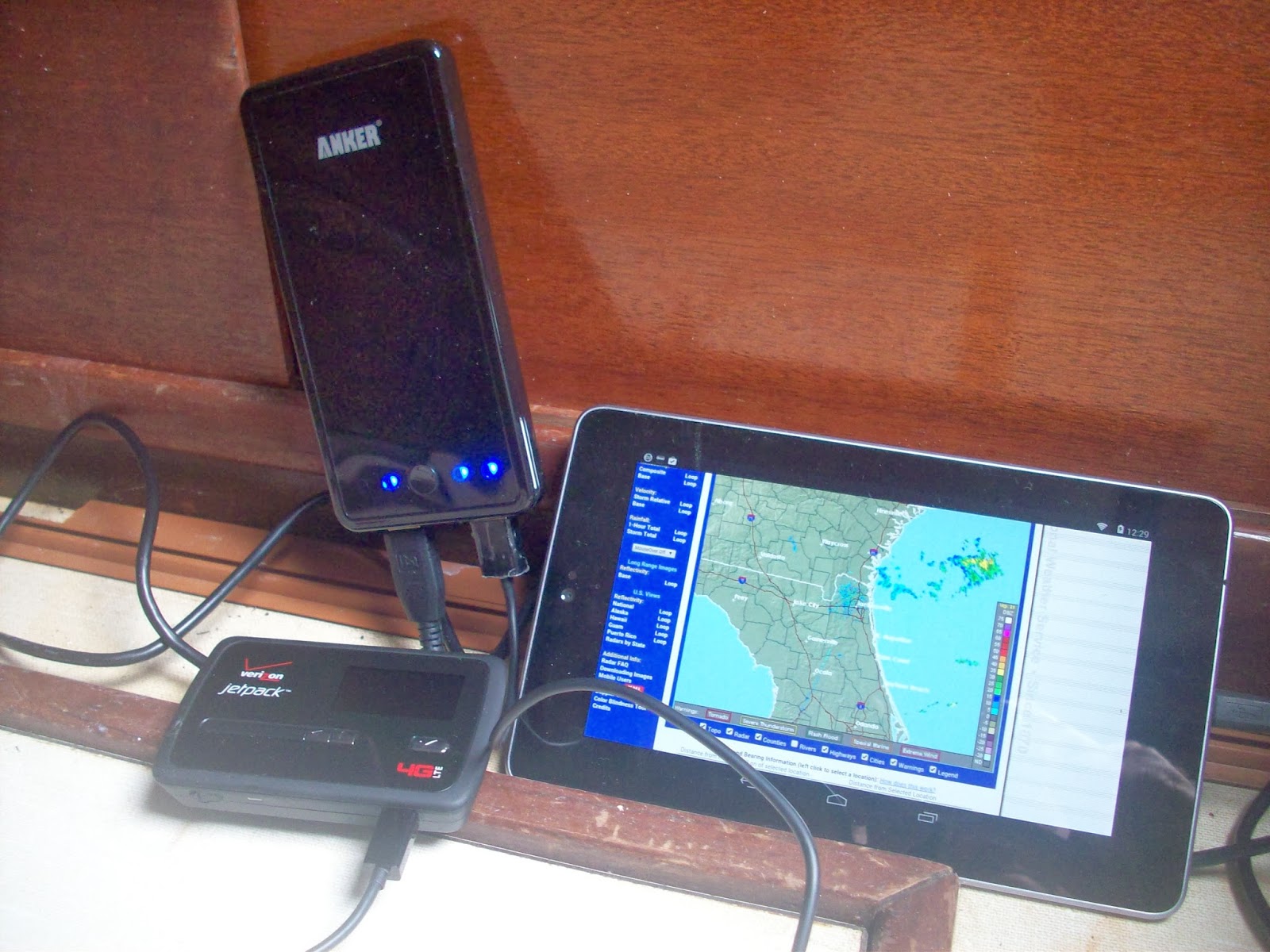 Works brilliantly but I hope to get the new 8" Toshiba Encore next week when they come out and run OpenCPN on it.
I was in the marina office and ran into a fellow Kiwi named Simon. Now that is a pretty rare occurrence for me here in the USA, half a world away, but was amazed to hear that he had gone to the same high school as me. Then, of all things, it turned out he had gone to the same bloody primary school as me. What are the chances of that? I took him up to Walmart so he could buy a bean bag for his Bahama trip. He actually bought 2 because he said the beans go flat quickly. We went and ate pizza and were talking about Kiwi singer Lorde being the number one song for 9 weeks in a row here in the USA and guess what? Not 5 minutes later, they started playing her song there. Of course I went out immediately and bought a lotto ticket, but I at that stage, I had used up all my mojo.

Here was Simon on his cat boat. 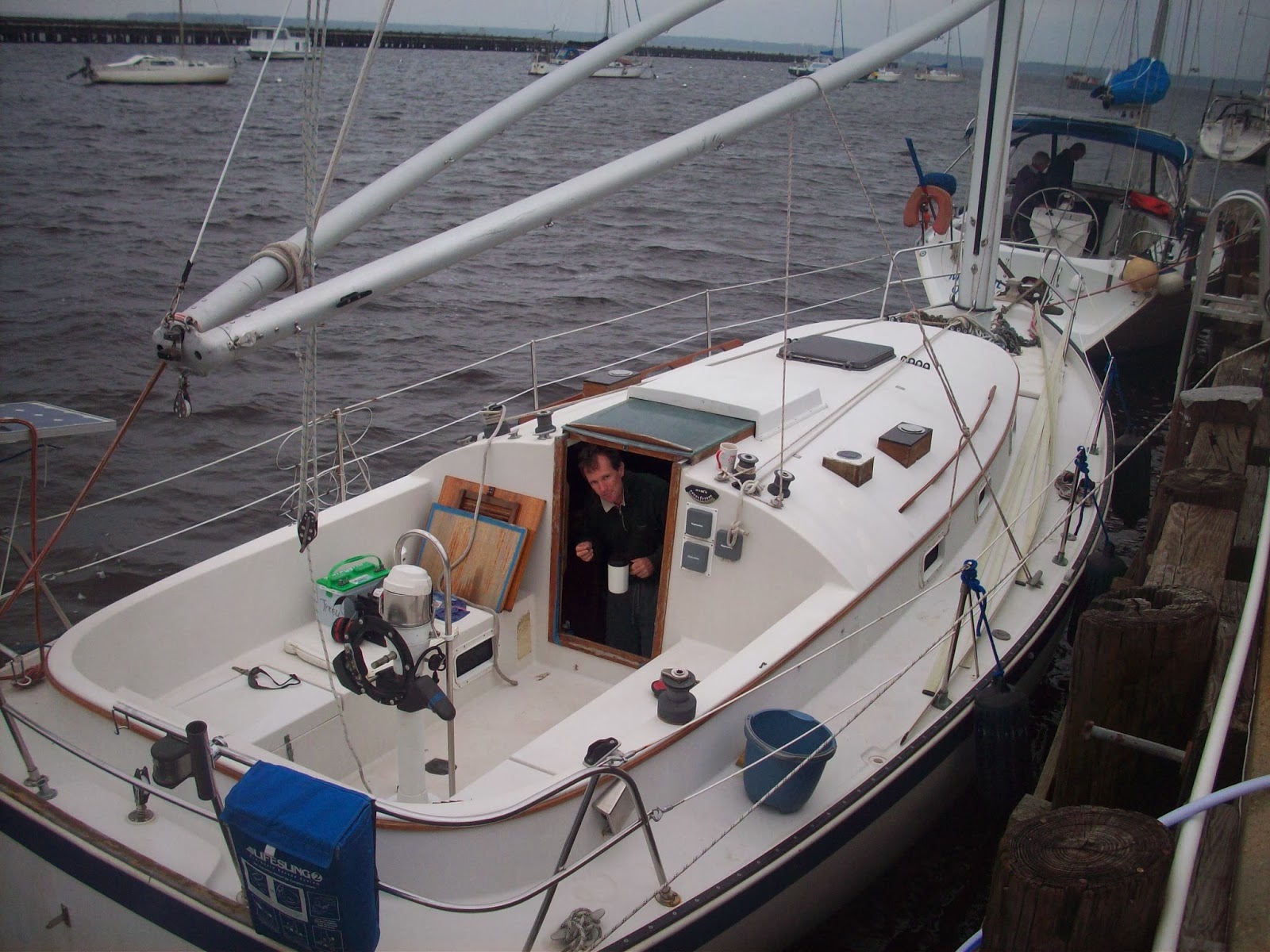 I brought home a pin from my pin rail so I could copy it and make 8 new ones.
I am also working on getting my 3 oil lamps functional.
I picked up my new rigging and turnbuckles from Bud Taplin which I hope to install this month. Friday I have a crane booked to lower my mast.
Posted by Onapua at 9:26 PM