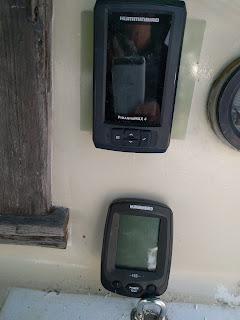 Well I discovered my depth Sounder was toast so I had to scramble around looking for a new one and fortunately there was a Walmart close by that had a replacement. It took me a while to run the cable to the inhull transducer and build a new backing plate for the control head, so I didn't get finished until midday. By the time I had put on the mainsail, stowed the last of the provisions, had a shower, parked my car and finally got to a point that I could leave, it was 4pm and little bit too late to get started out. So I paid $40 for another night at the marina and my plan is to wake early tomorrow morning and head north. Depending on the wind I hope to make either Horseshoe Island or Rock Island where there is a State Park. Either place might be hit or miss with regards to the internet so my blog entry tomorrow may just be text without photos. I use a cell service called Project Fi from Google and so far the reception has been a little spotty both here in Michigan and also in Wisconsin. The good thing about Project Fi is that when i go to a new country like Canada, I don't have to buy a new Sim card. 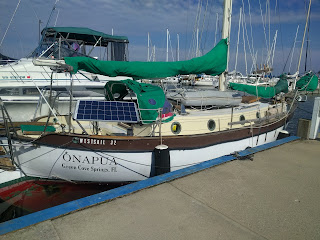