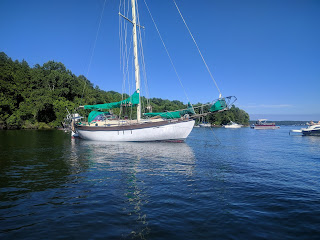 It was a 20 mile sail over to a beautiful cove well protected from the brisk northerly wind. There were some bigger boats but mainly smaller skiffs came and went throughout the day. It was just great to get back sailing on the boat again and I started out at 5am to grab a 6 knot romp there.
The wind clocked around to the north east around midday in the direction that I am heading so I put my hook down and called it a day with a serious nap on my schedule to catch up on lost sleep.
Ok a bit of trivia today. Which state in the USA has the most lighthouses? I mentioned lighthouses because just before I arrived today, i took a photo of the Eagle Bluff light. It was built in 1868 for $12,000 and automated in 1926. The former lighthouse keeper's home has been a museum since 1963. 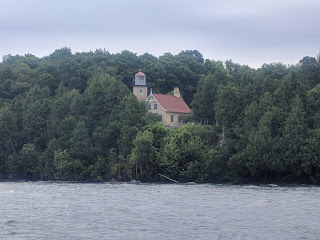 Michigan has the most lighthouses with 124 followed by Maine with 80
Posted by Onapua at 5:44 PM