There is an age old debate about which is better, a traditional monohull or a Catamaran. Unfortunately it is like comparing apples and oranges. They are two completely different boats and one situation that cats are very good at is in a social atmosphere because of their huge space. A generation ago, monohulls were the only game in town and of course there were some cats around, but it was so unusual to see one that they were quickly the focus of attention. Sailors liked to talk about the risk of them turning upside down. What they didn't like to talk about, was the fact that they were a lot more comfortable and didn't heel.  Today, I walked up to Hog Heaven, a restaurant that overlooks Leverick Bay in the BVI and took this photo of our Anchorage. My boat is to the far left. 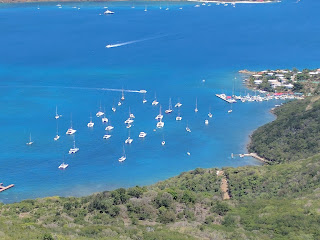 Half of the boats are cats and I would say that this is typical of all the boats I see here in the Caribbean. It surprises me, that the world of boating has changed so much in such a short time. Look at the America's Cup, racing in cats. There are lots of pros but the main advantage of a Catamaran is it's stability. You can safely put your cup of coffee down while sailing and know that it will still be there 5 minutes later. The main advantage of a monohull is it's cost. A well built monohull that you can sail around the world in, is one quarter the cost of a cat that is as well built. To each his own.

I'd like to finish up with one more photo of the anchorage, this time at sea level from my boat. 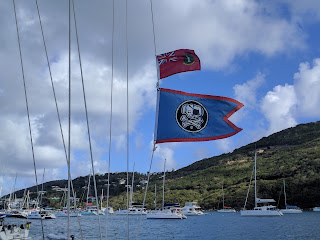 This photo would have been impossible to take 20 years ago before digital cameras​ because I had to take more than 50 shots before the picture showed both the BVI courtesy flag and my Salty Dawg burgee fully extended.
Posted by Onapua at 8:57 AM