I have so much catching up to do with all the media I have stored up from my last 3 weeks so I will start with a photo in old Havana that I took with my SX40 Canon. Does anyone know what kind of model it is? Plymouth? 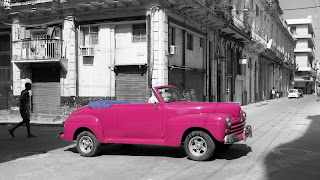 I wanted to leave the color of the car intact and have the rest of the photo in grayscale so ran it through Photoshop, selecting the car, copying it to the clipboard, using a black/white filter to change the photo, then pasting the car back over the top. I had seen this effect before, but I didn't realize how easy it was to do.

Another photo in Havana, this time of another Westsail like mine called Alaya. 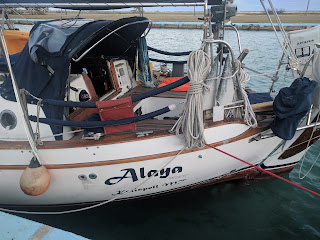 Onboard was a young 20 something year old Mike, who had bought the boat in Mississippi, repowered it with a new 38hp Beta, thrown caution to the wind and headed off to chase his dreams. 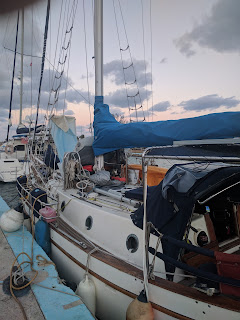 It was a lot of effort for me to go to Cuba so I asked him whether or not he had filed a 3300 form to get permission from the USA government to go to Havana but he said he had no intention of ever going back to the USA. The next morning, he left on his way to Isla Mujeres in Mexico.

Finally, I wanted to show you a photo of the effects of that weather crossing from Cuba last Monday. 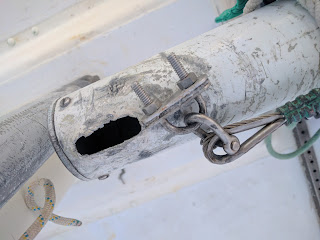 Remember how I lost my staysail clew and had to go up on my foredeck in the night with pouring rain and jury rig a new sheet? Well the old one was attached to the staysail boom and you can see from the photo, that it had ripped the metal right out of the boom. Phew! I don't want to do that again.
Posted by Onapua at 6:35 AM