Well I have risen to a new low. One of fancy food stores here threw out a bunch of nearly expired yogurts which my friend kindly helped themselves to and offered  to me. 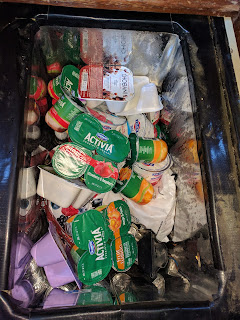 I had heard about this practice of supermarkets and now I know first hand that it is true. It seems such a waste. Surely they could have been given to a local church or food bank. According to the Natural Resources Defense Council, 40% of food in the United States today goes uneaten. And let's not stop there. Let's talk about water? The average American family of 4 uses 360 gallons per day compared to just 5 for an African family. Pharmaceuticals..... Millions of pounds of prescription drugs are wasted every year.
Posted by Onapua at 6:27 AM