One of the items that I bought when I was outfitting my boat a couple of years ago, was a high amp alternator to replace the standard Yanmar one on the boat. This would allow me to charge my batteries quickly using the Diesel engine. This morning I decided that today would be a good day to swap it out. There is nothing wrong with my current one but I bought it second hand for next to nothing and I trusted the seller and it looked as good as new. 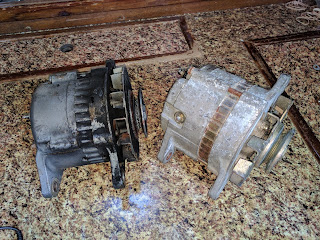 Well I took the old one off, which involved loosening the engine belt, taking off the three bolts that held it in place and disconnecting the positive, negative and charging plugs from the back. All this took me twice as long as I had expected and low and behold I had to install a new earth connection on the back of the new alternator. 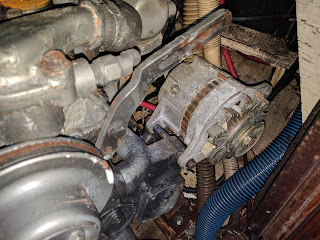 It took me about an hour to mount the new one and everything was going ok until I realized that I couldn't quite mount it into the right position. The new one had a little bump at the base of the positive connection that stopped it from being positioned correctly. Drat! 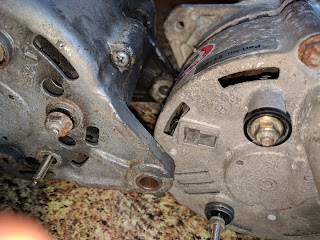 No way around it so the new one had to come off and the old one back on. That was a waste of a couple of hours! There is a lesson to be learned here I am sure.
Posted by Onapua at 1:24 PM